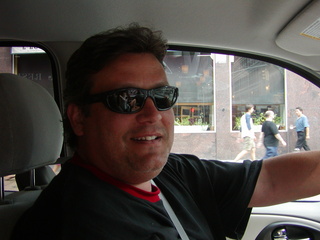 Eric Schmitz is from Austin, Texas. He began playing guitar at age 12, with Mike Scaccia on guitar and Nicky Papa on drums in Irving, Texas while attending HFN. During the years at Irving High, his bands dominated the talent shows. The Northlake Jam, an annual outdoor concert produced by Schmitz and friends, became a legend in the area for rock fans under the legal drinking age. After receiving a degree from the University of Texas-Austin in Radio-Television-Film (Audio Production), he joined Eric Faust and Buz Zoller in Flowerhead, and became what he still believes is a "moderately famous rock star", after the band signed with Zoo Entertainment/BMG. That's all he ever wanted to be, which fuels his talent for advising others seeking the craft of music.While waiting for Flowerhead to come back from hiatus, his solo project Cedar Park began. Songs relatively good and bad were recorded, in an analog/digital environment. Before letting the songs die in analog, production efforts were made to go fully digital, and then locate/store the songs on an Internet forum. The only intent was computer back up on the 'net. But then...That space became OurStage when Schmitz realized the potential, and just plain fun, of the site. Charged by the site and it's people, Eric Schmitz is embarking on his Comeback Special...---Peter Jacobsen

Throwing a Tantrum That Speaks for Youth by The New York Times
One of rock music's uses is to proclaim what listeners can't muster the courage or the words to say themselves. In songs that articulate the frustrated attempts of the young to claim a space in the...
Flowerhead: Information from Answers.com by All Music Guide / Answers.com
A Texas group that attempted to resurrect '60s psychedelia (but wound up sounding like Soundgarden), Flowerhead was a hard rockin' quartet that enjoyed a brief career during the early '90s....
Flowerhead on Wikipedia by Wikipedia
The seeds of Flowerhead were originally planted deep underground by founding members Eric Faust (Lead Vocals, Bass, Guitars) and Buz Zoller (Guitars, Vocals) in 1987. With the addition of Eric...
FLOWERHEAD by TrouserPress
FLOWERHEAD (Buy CDs by this artist) Turmoil in the Toybox EP [tape] (no label) 1990 ka-BLOOM! (Zoo) 1992 The People's Fuzz (Zoo) 1995 The six long songs on the self-released Turmoil in the Toybox...
Reviews at Psychedelic Music by Psychedelic Music
Samples: What a great cd. I loved every song. Where are they??? Gibby Flowerhead rocked..they toured with my band (Thee Hypnotics) in the US and we loved them...they were gentlemen and we miss...