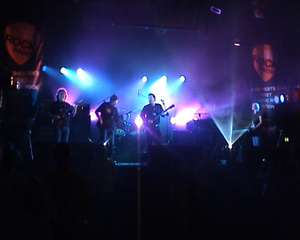 Fink Ployd are widely regarded as the best Pink Floyd tribute act in the United Kingdom.

They were recently chosen by Rock Radio 106.1 FM, to appear at their birthday party celebrations at the Ritz theatre Manchester. The Monsters of Mock party, hailed by Rock Radio as featuring four of the countries finest Rock tribute bands, Fink Ployd, along with Rattle & Hum, The Rolling Clones and Limehouse Lizzy, brought the house down.

The spectacular Fink Ployd show is around two and a half hours of the inspiring music of the Rock juggernauts 'Pink Floyd' and includes classics such as Set the Controls for the Heart of the Sun, The Dark Side of The Moon in it's entirety, plus many more tracks from the legendary albums, Wish You Were Here, The Wall, A Momentary Lapse of Reason and The Division Bell.

If you are a Pink Floyd fan, you will love Fink Ployd