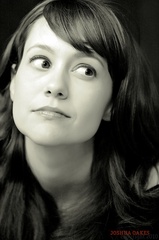 I’m a folk/pop/rock singer/songwriter in Nashville by way of the gleaming beaches and rolling hills of California’s Central Coast. I get my musical interests from a lifetime surrounded by musicians. My mother was signed with Warner Brothers during the early 60s, after which she and my father become touring musicians. My major influences include Nanci Griffith, Ben Folds, Counting Crows, Sarah McLachlan, Patty Griffin, Sheryl Crow and the Dixie Chicks. I released my second album, "Coming Around" in June of 2009.

Practice Room Album Review by Russ Elliot
Practice Room (Flo Paris Music (USA) 7 83707 37050 7, 2006) is an almost 40-minute collection of nine acoustic guitar-backed gentle rock tracks with a religious underpinning, however, the lyrical...
Coming Around Album Review by Musical Discoveries
(26 July 2009) We first heard Flo Paris as one of the singers in the progressive band Glass Hammer. Her solos and backing vocal parts across the band's numerous albums, DVDs and live performances...
Clubbing Inspiration by Ashley Schwellenbach
The girl who went to NashvilleFlo Paris didn’t have any question as to whether she could hit the 14-song mark. Writing 14 songs in 28 days would be easy. Writing 14 caliber songs that she could...
p
A
n
E
F
Song Title by Artist Name