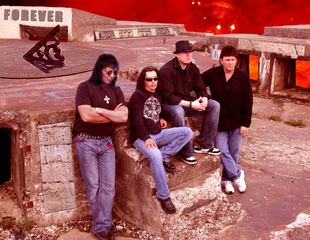 It was this combination that helped Forever win 6 awards for their first 2 full length releases, Two MIANS Awards (2003,2005) and Two ECMA Awards (2004,2005), 2 CAMA'S (2005) as well as a nomination for “Best Video” for ‘Without your Love’ from their debut release ”Welcome to Forever” and and an award win in Toronto for the video ‘FREE’ from their second CD ‘Something to Dream of’.

They had success with their originals, achieving Forever three regional top ten hits with the singles; “Here With Me, #4” and “Without Your Love, #6” and from their first CD, and “One More Time, #5” , from their second release, “Something to Dream of…”. In addition to Canada, they continue to receive airplay in 10 other countries worldwide including China where they performed 16 dates including Shanghai and Beijing and were broadcast 'live' to over 5 million listeners.

Well known for their showmanship and chops, Forever mixes a high energy set of their own popular songs, with current hits from Nickleback, 3 Doors down,Theory of A Deadman, etc, and some unforgettable classics from Nazareth, AC-DC, Pink Floyd, Black Sabbath and many more.

Forever are currently in the studio finishing up their 3rd full length CD due on August 7th 2009 and will be touring across the country in 2009/2010 including a show at the 2010 Para/Olympic Games in Vancouver in 2010.

With first class performance on and off the stage, and rave reviews from around the world, come and see why the critics have said Forever is “One of the most influential and respected Cape Breton Exports in decades!”, “....music to be experienced to the extreme”, “...first class performance on stage..” and “Must see this band Live!”. For booking or more info on Forever contact Keith Dawson at 902-929-2008 or visit their online site at www.reverbnation.com/
forevermusicgroup.
Expand

Play
Come Back to me

Play
Out of Time

Play
Come Back to me

Play
Out of Time

Play
Without Your Love
Expand

Live performance review with Honeymoon Suite by What's Goin' On Magazine
From Wednesday Nov 13 2002 edition. Honeymoon Suite / ForeverBy Wanda Earhart November 14, 2002 – Savoy Theatre Honeymoon Suite muddled through an evening of memories and new material at the Savoy...
Forever blazes a trail for local bands by
FOREVER BLAZES A TRAIL FOR LOCAL BANDS Through working my way down the list of potential profiles, I have learned a lot about local bands that I may not have heard before, as well as new things...