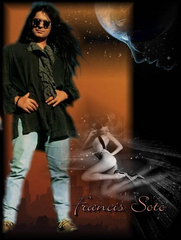 by now, FRANCIS SOTO is back - with eponymous band and with a new project in the back - METALAPOLIS - part 1. FRANCIS earned his first credits as a singer with ARMIN SABOL (responsible for the PETER SCHILLING-hit ..Major Tom..) in the early 90..s, later he was able to celebrate international success with SUBWAY and WICKED SENSATION (on tour with KANSAS, ASIA, AXXIS etc.). behind METALAPOLIS there are in addition MARKUS METZGER (keyboards and programming), Andy (guitars and bass) , who collectively developing the METALAPOLIS-concept. the source of inspirtion for the album is to mask nearly all stiles of rock (from traditional hardrock to modern rock, from gothic to pop-rock) and to manifest, that there is only one root acountable - the rhythm and blues from the beginning of the last century. musically there are no frontiers, consequently there is no suitable tray for METALAPOLIS - there is everything: from drifting, aggressiv guitar-riffs, over mainstream-harmonies up to electronic beats. all this is dominated by the voice of FRANCIS SOTO, who provides the songs with definitely catchy vocal-lines. some titles are equally finished, some others yet in a raw recording-habit. at the beginning of 2007 the work shall come to a general public. 2 samples are already audible at www.francissoto.com. we keep you up-to-date ... rock on