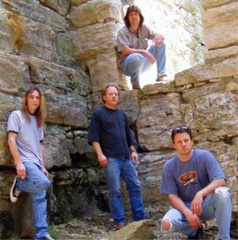 Location
Freedom and Whiskey is from the Louisville, Kentucky / Jeffersonville, Indiana area in the heart of the Ohio Valley. The style of music is a mix of classic / modern / southern rock and blues rock.
Musical Influences
Led Zeppelin, Pink Floyd, AC/DC, Steely Dan, Sound Garden, Fleetwood Mac, Robin Trower, Muddy Waters, Walter Horton and many more.
Members
Mark Hoekstra – Vocals / Harmonica; formerly with “Legendary Blues Band” and “Homesick James”
Chuck Mingis – Lead Guitar; formerly with “ Days of the New”, and “EdenStreet”.
Mike Huettig – Drums / Vocals; former bassist with “Days of the New”
Bill Goins – Bass Guitar / Vocals; formerly with “Rude Awakening”.
Freedom and Whiskey was originally formed in 2003 and released two prior albums. In 2007 the band changed their line up to include Mark as the new voice and front man for the band. Mark is a veteran musician who has played harmonica and sang with several blues and rock bands over the years. Up until this point Bill and Mike had been doing most of the writing, singing and guitar work, but the chemistry worked better for the band to perform with Mark as front man. Mike changed his focus to full time drummer and Bill went to the bass after the addition of Chuck as lead guitarist. The band started writing and recording new material together to have a good representation of the new line up. The music evolved even more and the band has just completed their third album titled “Super Real”. The style of this album is In Your Face, 100% Pure American Rock. Reviews of “Super Real” say it’s the best yet. The 3rd album was released November of 2007.
In 2007 Freedom and Whiskey also released their first video for the song “Whiskey State of Mind” from their third album, available on their web site and on You Tube.
Contact Freedom and Whiskey at:
Web site -
Email – FreedomAndWhiskey@Gmail.com