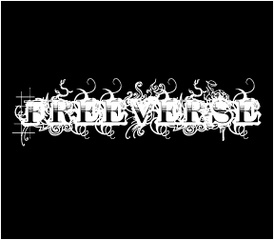 ONLY 22 YEARS OLD AND EQUIPPED W/ A LOVE FOR MUSIC AND SONGWRITING, THE VERSATILITY POSSESSED BY THIS MUSICAL GENIUS LEAVES NOTHING IMPOSSIBLE!!

FreeVerse: With a more popular flow, FreeVerse sticks to the straight four accents on the beat at a slower tempo. This, with the descending vocal cadence at the end of a line, are both very representative of what usually seen in the Rhythmic Top 40 charts.

MTV's Opinion of New FreeStyle Artist FreeVerse by
Press Shuffle: Songs To Freestyle To Published by felipegaviria on September 21, 2011 in Reviews & Playlists, Urban This week our targets are the Urban Channels. We focus particularly on the...
p
A
n
E
F
Song Title by Artist Name