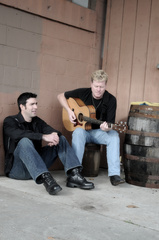 Game Six is the Olympia, Washington-based acoustic duo of Rob Morgan HIll and Derek Harris, whose album "God, Love & Mexico" on Exit 104 Records is slated for release in March of 2009.

Mixing a country music base with spiritual themes and twists of tropical, folk, rock, Latin and jazz sounds, Game Six has come to call their music "country-slash" because, as songwriter Hill says, "There's at least a little bit of country in everything we do, but there's almost always a slash before or after the country." Adds singer Harris, "A country music purist might not even think of us as country at all, but the same could be said about a lot of modern country artists that have influenced us and who we listen to."

The theme that unites the 13 songs on the new album can be found, the duo says, in the album's title. All the songs are about God, or love, or Mexico, or some combination thereof. But it's not just the title of the album for Hill who says "God, Love & Mexico" is also his formula for happiness in life. Finding much of his inspiration in spiritual themes, he's a husband and father of three daughters, and though he's a fair-skinned Irish boy, the singer-guitarist can't get enough of the sun, the culture, the pace, the music and the people of the small towns on the Mexican Riviera. In fact, the group is scheduled to celebrate the release of the album on two stages - one in their home town of Olympia and one in the Mexican coastal fishing village of Bucerias in March, the unlikely location for the "Shamrock Bar", the Irish pub that inspired one of the songs on the album.

Joining Rob and Derek for their album release concerts and on several of the tracks on the album is the spectacularly talented vocalist Brittany Kingery, who is working on her own solo album project this year with Exit 104. Among the other talented artitsts who contributed to the recording are producer-keyboardist Brent Pendleton and pedal steel player Milo Deering, both of whom have extensive country music credits that include work with superstar LeAnn Rimes.

Please contact us for this information. This depends on whether we are appearing as a duo, trio or band.