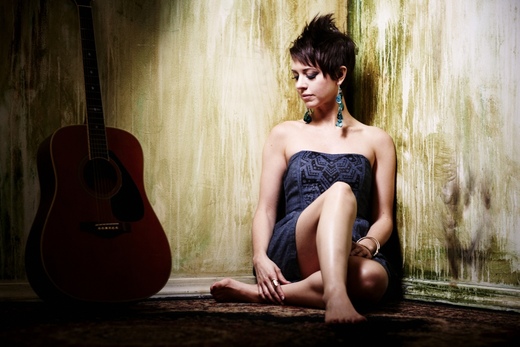 In just 2 years of dedicating herself to music fulltime, singer-songwriter Julie Kathryn has made an indelible impression on the music community with her sensual Americana noir. In 2011, she graced Music Connection Magazine's esteemed annual "Hot 100 Live Unsigned Artists & Bands" list. The publication enthused: “her solid alto voice is rich in tone…she uses it gently to tell her stories, never pushing or oversinging, which is a breath of fresh air.” Rockethub.com noted: “Julie Kathryn is one of the best emerging artists in the current NYC scene. Every one of her performances mesmerizes and inspires.” Sometime in Long Island City blog has said: “Julie sings with an understated intimate style and an exquisite sense of timing that makes you feel that only you and she are in the room.” She’s been favorably compared to Leonard Cohen, Natalie Merchant, Bob Dylan, Neil Young, and Norah Jones.

She has appeared at distinguished NYC listening rooms such as Rockwood and the Living Room. Live, her sultry stage persona reflects the slowburn beauty of her music. Her uniquely mystical fashion sensibility enhances her artistry; it’s an overall aesthetic aptly described as “Audrey Hepburn meets Joni Mitchell.”  This enigmatic aura even extends to the detail of having a two-part first name with no last name, Julie Kathryn. Onstage, she marks time tapping her foot while wearing vintage cowboy boots. Visually, her signature choppy-chic “pixie haircut,” eyebrow piercing, tasteful accessorizing, boldly stark fabrics, and her affinity for rompers, convey an edgy femininity that’s progressively glamorous without appearing overly manicured.

The recently released Broken Love EP is an elegiacally elegant 4-song collection that traverses all intersections of American music: folk, jazz, blues, and soul with a dreamy sprawl that’s both earthy and otherworldly. The tragic romance in her writing, and the eerie beauty of her compositions, make her EP boldly vulnerable.  “My music is emotionally raw,” Julie Kathryn says. “The title ‘Broken Love’ is something a lot of people can relate to. The song ‘Broken Love’ is inspired from a relationship 10 years ago but the visual details, the images of him, are burned in my mind,” she reveals. On the track, her vocals are tenderly haunting: I hear you’re sleeping by the river bend/Is that how you love me?/Spring is coming, the witch is dead/My first love’s unfolding/Unfolding. The track is powerfully essential, with each instrument playing with gorgeous restraint. Subtle production flourishes like stately strings, tastefully glitchy percussion loops, and celestial lap steel melodies lend the track, and the EP, a wonderfully transcendent moodiness.  The EP was produced and engineered by her guitarist Ryan Mackstaller and respected vets Roma Baran and Vivian Stoll, known for their work with Laurie Anderson.

Julie Kathryn is readying a poignant video for the sweet but mournful “Let This Be,” a track written after her grandfather passed away. “My grandmother died many years ago and my grandfather had a companion. They had a beautiful relationship for 20 years. The day after he died, this song came into my head from her point of view of loss and grievance.”  She sings with delicate emotionality: Let this be our last waltz/let it take the place of everything we’ve lost/you and me/we know time stands alone/we are still together/no birds have flown. The delicate song has poise and emotional power, with pining strings, a plaintive guitar motif, and Julie Kathryn’s shimmering vocals.

Julie Kathryn grew up in Lake Placid, New York, studied classical piano, and took up the guitar at 17. She discovered her innate abilities as a singer during a songwriting course where the teacher quipped “you could sing the phonebook.” Prior to pursuing music, Julie Kathryn had a promising social work career enriched by an impressive academic profile. “I always had two things, playing music and helping people through social advocacy, but I wasn’t sure what path to take.  I did advocacy work for homeless people, drug addicts, and criminal defendants who didn’t have any money,” says the singer-songwriter. “After interviewing clients in the Tombs [New York jail] during the day, I would go out at night and play gigs.” One afternoon, while rushing for the subway, she fell down a flight of stairs and broke her elbow, tore the cartilage in both wrists, and from the fall’s fallout, ended up developing two cysts in her wrist.  It was a messy, career-threatening accident with painful ramifications Julie Kathryn battles to this day. “The only thing I could think about was how the injury would affect my ability to play guitar,” she says. Her steely determination to keep playing helped her get through the nasty spill’s aftermath of surgery and lengthy physical therapy. That fateful moment she decided to devote all her attention to music and leave social work.

“I always felt this deep calling to help people and my first response was social work,” Julie Kathryn explains. “I always wanted to make an emotional connection to people. Social work informs my music because it helped me be in touch with my emotions and be empathetic, but when I stopped feeling spiritually connected to it, I realized I could serve a higher calling through music.”