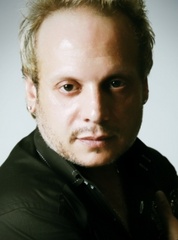 An Italian born in Belgium. His parents had immigrated
from Sardinia, Italy to Belgium in hopes of a better
life for their children.

Giancarlo began on his journey to a grand passion with
music at the tender age of three. His passion was
fueled by his father whom had at the time been a part
of an aspiring 1960's Italian Rock n' Roll band. While
their dreams had never panned out Giancarlo never gave
up hope nor his love of music.

With an early start he was enrolled in a school of
music. The Academie de Musique of Courcelles. He was
among the youngest of students attending, being the
mere age of five. His lessons were tailored to
classical guitar. It was here that Giancarlo would
meet his mentor of ten years. Freddy Pauwels, a well
noted musician, in Belgium.

At the age of twelve Giancarlo began to received much
appreciated attention. This attention came from
critics, even the Belgian government had taken notice
of this young mans, undeniable talent. He was awarded
with many different things among the highest, a gold
medal from the Belgian government. This was for having
graduated at the top of the entire student body, from
the Academia de Musique of Courcelles.

At the age of sixteen Giancarlo had been honored with
an invitation to preform with the Chamber Orchestra
Lieqe (Belgium) Concerto Di L. Boccherini. This was to
be preformed at the National Theatre in front of an
audience of 1050 people. The tickets had been sold out
within three weeks of the concert.

At the age of seventeen Giancarlo was preparing for
his first international competition of Reine Fabiola,
the queen of Belgium. The judges were comprised of
highly notorious names among them: Manuel Barrueco,
Narciso Yepes, Rafael Ituri and many more. In the
same year Giancarlo had graduated from the university
of music in Belgium Mons.

At the young age of eighteen Giancarlo had preformed
the famous Concierto d' Aranjuez for guitar and
orchestra. Composed by Joaquin Rodrigo. This was a
sold out concert preformed again at the National
Theatre with yet another full house.

On the television side of things Giancarlo has been
seen on televisions in Belgium, Luxembourg, Italy,
France, and Mexico.

Since then Giancarlo has preformed at various Theaters
as well as venues all over the world. To list a few
countries: France, Italy, Belgium, Spain, Germany,
Mexico, USA, etc.

Locally, Giancarlo had preformed for the Dallas
Society, at the age of twenty-two.