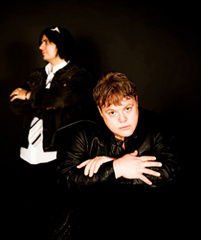 The Grayscale story begins with Douglas finding William through the murky soup of the Internet. They also found that they shared influences ranging from The Cure, to Snow Patrol, to U2. They rapidly assembled a catalog of alternapop gems-in-the-rough that would become their debut album, “That Flawless Flashing Day.” The combination of Douglas’ colorful and personal lyrics and William’s spacey melody lines formed the heart of the Grayscale sound… appealing and authentic, while still sparking senses of whimsy. Their follow-up album, 2010’s “Haunted Hours” was less lo-fi, but even more personal, covering everything from love, to lust, to loss, with plenty of spirituality and booze sprinkled in between. They closed out ’10 with the release of their Holiday single “What I want for Christmas is Summer.” Grayscale’s songs have been featured from cable television to the Web. Notable shows include MTV’s “Teen Cribs,” and The Planetary Society’s “Planetary Radio” program.

That Flawless Flashing Day: Grayscale's debut. by Billboard PRWeb
The long awaited and anticipated worldwide release of the debut CD from Grayscale, is onAugust 21 and has revealed an upbeat sound featuring a new delicate touch; a mixture ofcaptivating melodies...
p
A
n
E
F
Song Title by Artist Name