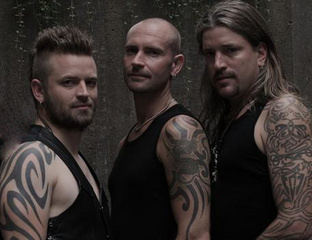 When drummer Richard Bång heard singer Magnus Arnar perform with Soul 78 at a festival in the summer 2004, he began formulating plans for a new band. At the same time Richard was invited as a guest musician on a new album his old band, Face Down, was recording. There, Richard ran into long time friends (and former Mozes bandmates), Jonas Wigstad (guitar) and Thomas Marklund (bass, backing vocals), who were also thinking about a new band. As the saying goes, "Sometimes you're born into greatness....".....and other times a twisted sort of greatness, happens while God is on his lunch break. This would be the second one mentioned. The 4 started playing together and the collaboration was raw........and pure........and hard core.......and breathtaking. Three years later, we managed to capture this living, breathing creature in our debut CD. Recorded at Grand Studio in Gävle by Petter Diamant and mixed by Jocke Skog at Fear and Loathing Studio. Ground Mower is THRILLED at the plugged-in, all-out result that screams 'GREAT FUCKIN' ROCK'!!!! Now everyone around the world can listen to the darkly gorgeous result!

Minimal; will gladly plug into your sound system; sound and staging works best in venues over 200 capacity;

Kerrang! review of Ground Mower CD by Mark Griffiths, Kerrang!
…fucking fantastic! Calling on seminal metal influences and mixing them up into a groove-laden sound, rich on big hooks and seismic riffs, this will sit favourably with fans [of the genre].
Muen review of Ground Mower CD by Jeanne Thomas, Muen Magazine
“….good old, nasty, rock and roll that these fine men so deliciously deliver… breaks [their songs] down beautifully featuring classic old school harmonies…leaves the listener well rocked, [and]...
Ground Mower music review by brother in ROCK! by Urban Myth
finally a fucking good track! it's about fucking time.. good recording standard.. good production, good musicianship. good hook, good riffs.. fucking ace.. damn! fucking fuck fuck yeah [on "Last...
Ground Mower CD Review by Dead Earnest
...a roaring, raging traditional face melter of a heavy metal band, [songs] that are positive anthems in their own right, and you have the recipe for the most satisfying Heavy Metal/Classic Rock...
Review of War Machine CD by Eighen Beheer, Hellspawn
Ground Mower gives us groovy, modern sounding hardrock with a darn heavy edge. They perform so effective and catchy that you are completely sucked in the "War machine". On top of that, add the...
p
A
n
E
F
Song Title by Artist Name