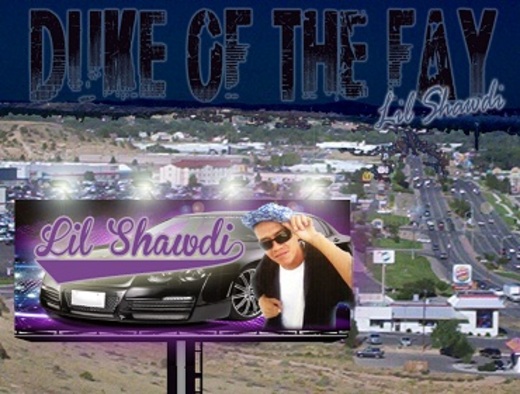 From his birth Lil Shawdi has fought his way onto the World of Hip Hop, Born into Humble surroundings lil shawdi was raised to appreciate every moment of his existance no matter the circumstance at the age of 12 Lil Shawdi was thrust into drug and alcohol abuse as he  took to living in the streets of Farmington, New Mexico surviving off his wits and hustle he struggled to live each day and slept what bit he could among the cities park sewage systems.

Amongst the backdrop of his tattered existance lil shawdi took each opportunity he was afforded to write lyrics and practice his technique amongs fellow Street raft Lil Shawdi Eventually was givin the opportunity to put his craft to work with the help of various friends and Family Lil Shawdi pieced together a brief demo and pettled it to any and everyone that would listen.Through his efforts he has garnered opening spots for such hip hop heavy hitters as Grammy Award Winng Artist Bone Thugs N Harmony, The Ying Yang Twins and MORE.

Today Lil Shawdi is in The Process of creating his first Professionally Produced album and although his success is coming Lil Shawdi Stays True to The Streets That Fueled The Fire Of His Paassion with a compilation of hard hitting true to himself lyricism laced with an in depth piercing gaze into the life and struggle of Lil Shawdi The Great Depression Features Such artist as Bone Crusher, Rasheed (The Texas Chainsaw), and The L.E.XProject to name but a few Though ever so brief The Stardom known as Lil Shawdi is growing by leaps and bounds and is in stark contrast to his humble Beginnings. . . .