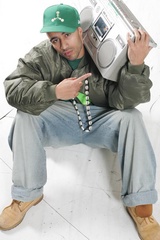 A Microphone and a PA System

Press Coverage by various
PRINT:EXIT MAGAZINE (Cover Story)SOURCE MAGAZINE (Under the Radar)VILLAGE VOICECOOL’ EH MAGAZINEHARLEM TIMESPLATFORM MAGAZINE (UK)MAHOGAY BLUESSHIELD MAGAZINEMUSIC NOTESHARTFORD ADVOCATESAN...
New Jersey Rapper Hasan Salaam Releases "Angel Du by hiphoppress.com
Hot new single for forthcoming LP "Children of GodHasan Salaam Teams with Brand Nubian's Lord Jamar for "Angel DustAugust 19, 2008 - San Jose, CA - Freedom Press and 5th Column Records are proud to...
Artist Of The Week by Adam's World Blog
Monday, October 06, 2008Artist Of The Week - Hasan SalaamAn up and coming emcee with some buzz is oftentimes described as being “hot in the streets,” so maybe it was a sign that during this...
Underground Report: Elzhi and Hasan Salaam by hiphopdx.com
Still staying on the east coast, and still in the vibe for conceptual and meaningful joints, HipHopDX heads over to New Jersey to chop it up with Hasan Salaam whose album, Children of God, a...
Album Review by hiphopdx.com
When religion is chronicled in Hip Hop, it’s either been the grandiose, such as Kanye West’s “Jesus Walks” [click to read] and MC Hammer’s “Pray” [click to read], or the critical, such as Jedi Mind...
Exclusive Interview: Hasan Salaam by raptalk.net
For this weeks Q&A session we hooked up with New Jersey emcee Hasan Salaam, After taking a short hiatus he has just released his anticipated new street album "Children Of God" which is...