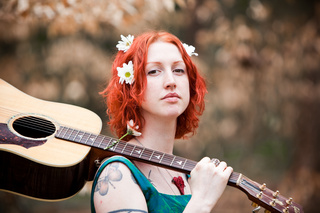 Heather has dedicated her life to sowing her music among the masses, cultivating a dedicated following from the ground up. In 2002, she released the live solo album, Drive It Like You Stole It, and in 2005 she released a full length studio album, Grits n’ Pulp. She toured extensively to support both releases, surrounding herself with a host of award-winning musicians (her rhythm section won the International Blues Challenge in 2003) and opening for the likes of Lynyrd Skynyrd, The GA Satellites, and The Zac Brown Band. In 2005, Heather became a contestant on Rock Star: INXS. Heather made it to the top 15. While INXS’s music didn’t reflect the sentiment and sensibility of Heather’s own music, she chalks the it up as a life-changing experience. The show also exposed Heather to an even broader fan base – it was like fertilizer on an already fertile field.

Atlanta Journal-Constitution Gallery by My Style Heather Luttrell
The AJC picked Heather's style for their weekly "My Style" project featuring locals with style.
Hell on High Heels Music Blog by Heather Luttrell
TUESDAY, JUNE 30, 2009Heather LuttrellI first heard her voice on the Lynyrd Skynyrd cruise in 2008 and she floored me. She is by far one of the most talented, amazing female singers I've ever heard...
p
A
n
E
F
Song Title by Artist Name