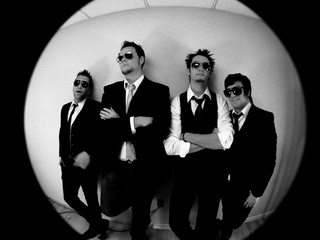 Formed in early 2008, High Tolerance consists of vocalist/guitarist Chris Sampogna, brother and drummer Anthony Sampogna, guitar/ extremist Dan Lukasiewic, and bassist Patrick “Chi Chi” Rutter. It was their mutual love for “old school” rock with fresh, melodic, sounds that brought the two brothers and two cousins together musically. Rehearsing in Eastern Long Island (where the band resides), while Chris travels from Brooklyn Heights to attend as frequent as possible, the group began to build momentum with their huge sound, catchy rock anthems, and guitar solos that bring back talent and distinctive style in true rock n roll fashion . Their songs come packed with energy, passion, and true musicianship, their unstoppable drive to make every show drip with talent, showmanship and entertainment help them stand out even further. High Tolerance has even bigger plans for 2009 and will take their unique sound farther than it’s ever been. Through constant song writing and consistent gigging High Tolerance has shown the local scene that there are no boundaries or limits for this band. They’re striding to be a catalyst in bringing back the days where true Rock n’ Roll dominated airwaves, charts, and stages, and with their non-stop, now or never attitude, nothing can slow them from turning the dream into reality.