Hip Kitty is Raw, Honest, American ROCK...music that transcends the expected and inspires the masses! We invite you to join our journey...

*Production must be approved in advance

PA: The house system must be of proper size to give ample

dispersion throughout the venue. The system must include:

MONITOR: PURCHASER must provide a separate on stage console with at least 4 mixes. Each mix must have a dedicated 31 band EQ.

STAGING: PURCHASER must provide stage with adequate space to 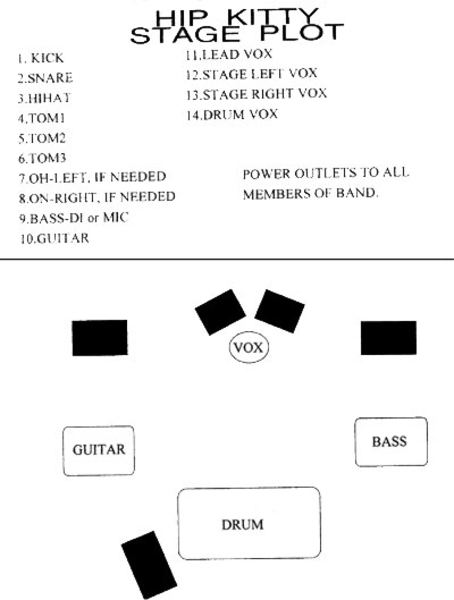 102..9 The Buzz – Nashville, TN. by Radio DJ Tony Stone
“I’m digging the new Hip Kitty EP. You can hear the growth of the music and talent on this one. Jen delivers a solid vocal performance, backed by great riffs packed full of energy. Check it out,...
98.9 The Bear- Ft. Wayne, IN by DJ Jerrdog
“It’s impossible not to have a blast anytime Hip Kitty is on the stage, and their CD is one of those rare albums that you can listen to beginning to end and enjoy every song you hear.”
Danielle Shaw by Nashville, TN
“Wicked lyrics, supreme instrumental skills, personal touches, the Art of War is the manifestation of the mastermind that is Hip Kitty. The special thing about The Art of War is not only that it...
Producer by Greg Archilla
Credits: (Collective Soul, Matchbox 20, Buckcherry, Safety Suit) “Hip Kitty is an exciting New Rock Band with great songs and an equally great Live Show. Their energy is infectious. They have...
Music News Nashville by Chuck Dauphin
“Justice and the music business are two things that don’t often go together. sometimes, the cream doesn’t always find its’ way to the top of the coffee cup. However, call me a dreamer, but...
Red Alert Studios - Gallatin, TN by Shawn Conley/Owner-Producer
“Hip Kitty is one of the hottest new acts that I have worked with in quite some time. They have their own unique inventive sound. It’s like a mix between “Old school rock” with killer female lead...
Disney Entertainment by Dave Westerskov, Talent Buyer
“It’s a pleasure to have Hip Kitty performing for Disney Entertainment. They’re a heavy-hitting, hard rock band with a stage presence and personality that makes them a favorite among our concert...
Goldylocks/ lead vocalist Goldy by Nashville, TN
“Hip Kitty is a band for the masses. You can bring these cats anywhere. They know how to rock all walks of life and most importantly are good to the rest of us out there doing the same thing. That...
Pleasure Island by Chris MacMillan/Engineer-Producer Disney World,
“When you go to a Hip Kitty show you’re guaranteed to have a good time. The energy that the band generates and the genuinely KICK-ASS rockin’ atmosphere they produce on stage is something that...
Jane’s World Entertainment, Tampa, FL by Jane McKee/Agent,Owner
“Hip Kitty is sure that their audience has as much fun listening or singing along with them as they do on stage during any performance. I count them in my top level of touring acts.”