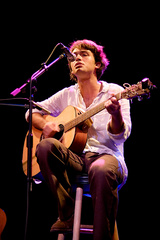 19 year old composer, songwriter and fretted instrumentalist Houston Davis Jones is a musician without borders. He is equally comfortable in the recording studio working on his self produced albums or in the dance studio working with choreographer Jeff Satinoff on a ballet. He has scored two independent films; 'Satori' and 'Wednesday'(which won audience choice at Palm Beach International Film Festival). Houston's music is an organic stew of musical influences featuring sounds ranging from Brazilian street jazz to American primitivism to french pop and early 20th century classical but it's all rooted in a style that is all his own. "At it's core, all music is the same, it's funny how people become blinded by genre, allowing simple variations in instrumentation, rhythm and harmony to keep them from enjoying the eclectic musical banquet that is available".

Houston Davis Jones by The Glorious Hum
It's exciting to be able to get fully behind a debut album, in this case Houston Davis Jones' Songs for Existence. The must have a soft spot for his guitar, to make it sound so sweet. Sometimes he...
[Local] singer takes classical approach by Palm Beach Post
One of the first things you notice about young area singer/songwriter Houston Davis Jones is how far beyond his years he appears. A self-assured recent graduate of the G-Star School of the Arts in...
Talent from area produced bumper crop of music in by Palm Beach Post
Best acoustic-based CD Houston Davis Jones, Songs for Existence (independent). Acoustic-based is one of several descriptions for this recent G-Star graduate's debut CD. Jones...
Songs For Existence by Houston Davis Jones by AntarcticArt.Net
Houston Davis is a West Palm Beach, Florida-based singer/songwriter, sounding at times remarkably like the 1970s-era British folk artist Nick Drake. According to Houston’s myspace.com commentary, “...
p
A
n
E
F
Song Title by Artist Name