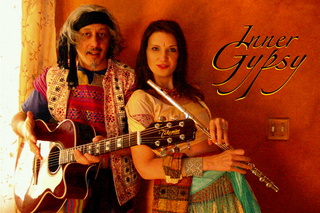 Inner Gypsy is the love-child of a guitar player and a flute player,who found each other in New York City, and who are linked as much by their love of every kind of music, as their love for each other’s ideas and world-view. Their music is an acoustic fusion of rhythmic and melodic styles from all over the world, performed with a deep understanding of their craft. Tiffany was a small town upstate NY girl with a great big wandering heart. She always knew that the only thing she ever wanted to do was to play her flute and travel the world. She studied music theory at the University of North Carolina in Asheville – including a course with synthesizer inventor and guru, Robert Moog whom, because of his creativity and consistent openness to new ideas, she remembers now with a great affection. But somehow, over the years, she had become distracted from her love of music, and found herself working as an executive in the world of high fashion in New York City. Traveling the world, yes – but for business. Seeing the diversity of the arts and culture this planet has to offer – but unable to contribute her true talents because of the stifling limitations of the corporate culture to which she had unwittingly become connected. Mario was a little Indian boy who was named after a famous Italian tenor. It was a different age, it was another world. As a child he moved from India, to London just as that city was dawning from out of a grey and dismal post war conventionality, into a place that “swings like a pendulum do.” It was an explosion of color and fashion and style and music where anything (and everything) goes! As a child he helped his father invent an instrument called the Sitar-Guitar, inspired by the then contemporary merging of eastern and western cultures. He too ended up in New York City. Involving himself in music from all over the world, he honed his performance chops playing with rock bands, jazz and world-fusion bands, with reggae bands and even for a while with Chubby Checker’s Rock’n’Roll Review. But eventually, he found himself trapped, through the vicissitudes of mundane economics, back in his day job: a designer in (what else) the fashion industry. But just when all hope seemed lost, it was New York City where these two soulmates met in early 2004. Their band, Inner Gypsy, is the two of them at its core, sometimes supported by other “gypsies” (percussionist, violinist, upright bass, accordion). However they are quite capable of putting on a high energy performance without any help, thank you! In the past two years they have performed extensively throughout the usual Manhattan club scene, as well as lesser know venues in New Jersey where they now reside as husband and wife. Mr. & Mrs. Sen have just completed their debut album, Gypsychology, a collection of eight original songs – which span a diverse and international set of styles while still retaining a pop music accessibility – and one unexpected cover, the old Sonny & Cher classic, "I Got You Babe."

"4 SONGS" EP released October 2006 (4 tracks)
Gypsychology
Only Seventeen
I Got You, Babe
Trees

Currently in rotation on Well Rounded Radio and Radio Fly.

Global Rhythm loves Inner Gypsy's track "Mariah" by Global Rhythm (Nov 07, 2007)
Classical forms from India take center stage with this hypnotic cut from INNER GYPSY""
Gypsychology: album review by Music Industry News Network
The new album by Inner Gypsy may be the best example of philosophical gypsy pop meets husband/wife virtuoso musicianship since 1965... which is not to say that Sonny and Cher were proponents of...
On the Gypsies by - Bobby Borg, Author/Musician
They sound really good with one another... the songs are easy to get into, with distinctive chorus and memorable hook..."
Fiery! Beautiful! Virtuosic! by - MDG Project
Inner Gypsy weaves together fiery flamenco-style riffs, beautiful love ballands, and virtuosic guitar and flute playing, inspired by Indian classical, Latin grooves and the best of American pop."
Gypsy is as a Gypsy does by - M. Furmankiewicz, HMP Magazi
Inner Gypsy's music is as free as gypsies worldwide."
by Joe Del Priore, CD Baby
Mario's descriptive language in the cut "Hoboken" cover both the old city and its modern progeny, crowded bars, feelings of solitude for the outsider. He uses a Dylanesque tone in "Clear as a Bell"...
Mario by - London, UK, News of the Worl
Mario's guitar technique makes a refreshing fusion of international styles available to a western pop audience."
by - M. Furmankiewicz, HMP Magazi
Tiffany's manner is very clear and strong. Mario's vocal parts are nostalgic and tearful."
Tiffany by Joe Del Priore
Tiffany Sen is a revelation on flute, never overplaying, always propelling her husband's exotic melodies forward."
by - Department of Virtuosity
... balladish songs grounded on melody, angelic sound of flute, virtuosic guitar and emotional singing..."