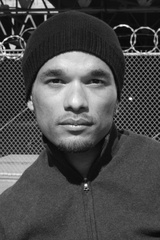 JAC (pronounced "Jack"), is the New York City born rock singer with soul, whose singing style has been influenced by singers as varied as Jeff Buckley, Chris Cornell, Janis Joplin, and the Rev. Al Green. However, his own powerful voice defies comparison with his mentors. As a performer, his theatrics onstage create a trancelike union with his fans… …relaying the message - A NEW, fresh, major talent has arrived!

JAC performance by MUSIC JAMMERS.COM
... I will tell you here and now. I don't know if I have ever heard any man's voice be so beautiful and powerful. I think its a mistake for this guy to limit himself to just a harder rock sound....
A Reinvented John A. Cruz is Back by San Diego Union-Tribune
... a brilliant talent who concocted a unique, deeply personal hybrid of rock, soul and funk...a powerful, dynamic voice; movie-star good looks; an athlete's body...sweat-drenched showmanship...
JAC CD Review by REVOLT MAGAZINE
... the power of Chris Cornell and the soul of Al Green...vocals built for rock and roll that reaches for the soul...make this a must buy CD...it's worth every penny.
JAC CD Review by San Diego Reader
“Polished and soulful, singer/songwriter JAC has the kind of vocal capabilities that serve as a conduit to the self-consciousness....At his best, he borders on a male version of Aretha Franklin in...
2008 JAC CD EP Review by North County Times
Not many singers have the stage presence and sense of theatricality that JAC possesses. On a his new six-song EP, the hard charging JAC combines classic rock, 70's glam and prog rock into something...
p
A
n
E
F
Song Title by Artist Name