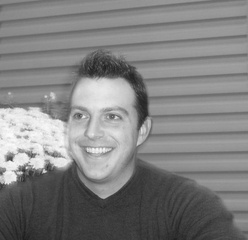 “Late Bloomer” These two words rang out as Jake Rightmyer was asked to describe himself. It’s not uncommon for Jake to downplay his natural talents, of which he has several. Growing up in a household that was equally fanatic about music and sports led to a multitude of station wagon trips to ballgames and band practices, both of which Jake excelled at. It wasn’t until college when Jake got the writing bug as he and a friend started playing acoustic gigs around Louisville, Kentucky. The short stint as a band built a great foundation for what was to come; Jake left Louisville to pursue music with his sister in Tennessee. During that time he joined up with several local musicians learning the styles of folk, bluegrass, americana, and blues. As Jake said,”It was an awesome experience and made me a better musician but my time in Tennessee was missing something.” That “something” was God; and even though Jake had grown up in the church as a preacher’s kid, he had never developed a deep personal relationship with Him. “I think my idea of God and Spirituality was lost in my own desire to get away from the Church because I saw it as a place that I had to go for so many years. Through growing up and learning how to really love thanks to my wife and our growth as partners, now I know what I need to do to really love God; and the funny thing is that I’m drawn to church now as if I can’t live without it.” Early Play is testament to some of that growth in Jake’s life. The song’s are the beginning of what he hopes is a career filled with music with fellow believers. The music was recorded at Bristol Park Recording in Edmond, OK under the engineering eye of James Williams. Production was handled by Dustin Ragland (of the Charlie Hall Band) and Stephen Collins (formerly of Luna and Fires of Atlas). Through their direction and some of Oklahoma’s finest musicians; Early Play was born to serve God in a “non-traditional” and entertaining way.

Early Play - the new EP by "Is it Christian Enough?"
When I think of Christian pop music the first thing that comes to mind is the local radio station who’s playlist is about as long as the drive from my house to work. In my 20 minute commute each...
p
A
n
E
F
Song Title by Artist Name