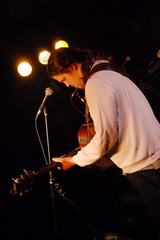 Musician Jamie Notarthomas has been an integral part of the independent underground music scene since the late 1980's, performing an average of 200 shows a year at all varieties of venues primarily throughout the eastern US. Over the years, his thought-provoking song writing and electrifying performances have established him as one of the most well-known acts in the region.

Jamie is a very sincere and inspired artist. His previous three original CD's have progressively developed a mix of musical styles, influenced by what he refers to the twelve apostoles of rock and roll, such as John Lennon, Van Morrison, Bob Dylan, Bruce Springsteen, Elvis Costello, James Taylor, Bob Marley, Leonard Cohen, Peter Gabriel, and Luis Jordan. He revisits his own poetic themes on environment, the beauty of nature, love, socio-political issues, spirituality and rapture, both humorous at times and then serious; he even writes songs about writing songs!

Now we are proud to announce the release of his much anticipated fourth CD, entitled The Crow Convenion.