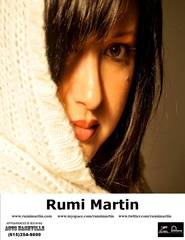 Janet Martin is a singer/songwriter of mainstream country/crossover radio ready hits. Janet was born in Chandler, Arizona and is of Japanese and Native American ascent. When she was 8, her family moved to Saudi Arabia where she was introduced to many cultures and music from around the world and embraced it. During that time, Janet's talents in singing and acting also bloomed. Janet participated in as many school and community performances as she could. Janet’s family eventually moved back to the United States settling down in St. Peters, MO. After graduating high school, Janet tried college then decided she wanted more adventure and enlisted in the Air Force. She eventually found a career as a medical assistant, but the flame in her heart for performing continued to burn.

In 1996, Janet ventured off to Anchorage, Alaska and went from working as a medical assistant and aerobics instructor to a respected radio reporter/anchor, morning show co-host and midday on-air talent. Janet also could be seen and heard on television commercials for Sears, Bennihana’s, National Bank of Alaska and One Stop Travel to name a few. During this time, Janet began writing and recording her own songs, not realizing that this would be her destiny.

Since Janet began her music career, she has completed two albums: Stronger Than Love and Janet Martin. She has performed at venues and featured on television and radio shows from Alaska to Florida. Janet has been featured on The Venue in Anchorage, AK for the past 4 years, “Show Me St. Louis in Missouri, featured twice in the "Limelight" on radio stations across the country through Listener Station and in national publications such as the A&R Registry. Janet has also shared the stage with, Brad Paisley, Reba McEntire, Tracy Byrd, Tracy Lawrence, Jon Conlee, Taylor Swift, Neal McCoy and guitarist Bob Saxton. Thanks to the internet, Janet has gained fans from around the world her music is featured on more than 100 mp3 sites internationally. You can view Janet’s videos for Heart To A Fool and Merry Go Round on her official website. Her video for Halo will be out this spring.

Obviously, Janet loves what she does. She is motivated by music, and driven by turning her dreams into realities. When you meet Janet, you'll more than likely find yourself smiling because of her good humor and genuine disposition, but listen to her sing and she'll take you on a soul stirring, emotion packed unforgettable ride!