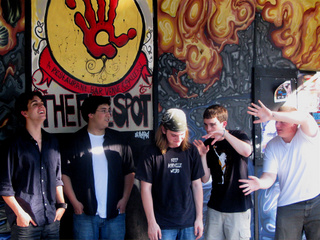 We are a young band from Asheville, North Carolina, creating our own style of music. The oldest band member is 17.
JTR started out in the fall of 2006 as a jam band. We played together a few months and wrote a song or two. A few band members came and went, but we got serious when Will and James joined the band. We wrote some songs, learned some covers, and played a few gigs around Asheville, trying out our "style". As we wrote more of our own material, each one of us contributing to every song, we began to realize our potential, and that with our combined efforts, we could create a new and unique jazz/funk fusion sound.

Stage size preferably at least 16 feet across and 8 feet deep. We have our own sound system, or for larger venues, we can integrate with a house system. Lighting, as required.

Earth Day Spectacular by http://www.citizen-times.com/a
Six top local acts perform at The Quality Forward Earth Day concert at 7 p.m.-midnight at The Orange Peel, 101 Biltmore Ave. The show includes Jazz the Ripper, Brushfire Stankgrass, Chris Cates and...
You Guys defined Ripping last night! by www.myspace.com/jazztheripper
Comment by Earth Day Asheville/ MySpace: You smoked it. Great job. Everyone was astounded at your level of musicianship. It was a pleasure to have you on the campaign. Thanks so much for your...
Benefit For Bobby Sax by Downtown Asheville.com
He lost everything in a fire, including all of his saxophones, and Bobby needs our help. Participating in the event will be professional musicians playing along with a youthful Asheville band, Jazz...
Bobby Sax is part of what makes Asheville ... by
Asheville Citizen-Times: Letter to the Editor:Anyone who missed the Bobby Sax Benefit Concert at Diana Wortham probably missed the concert of the year. Vice Mayor Jan Davis noted Bobby Sax made...
Watch Out This Young Band is Tearing Up the Town by The Laurel of Asheville
Five musicians, whose combined age is less than that of many jazz artists with whom we are familiar...are making a big name for themselves in the local music scene...
Jazz The Ripper: Age isn't always a make-or-break by Asheville Citizen-Times
Age isn't always a make-or-break factor in a musical group as the young, Asheville band Jazz the Ripper has shown. Drawing on the influence of their influence their heroes James Brown and Earth...
Jazz The Ripper-Funky and Fresh by The Urban Music Scene
these 5 young men are ready, if not already, to make their mark on the jazz scene.
Young band plays the Peel by Asheville Citizen-Times
For many of us, the biggest thing that happened in high school was the senior prom. But for a growing community of students who attend A.C. Reynolds High School near Fairview, the years spent in...
38 local artists you need to hear this summer by WNC Magazine -July 2009
Jazz the RipperGo see this band as soon as possible, because four of its members just graduated from high school and are leaving for college to study music. Though the group has only been together...
p
A
n
E
F
Song Title by Artist Name