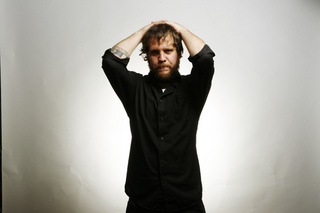 Jeff Knowlton is a singer/songwriter living in Brooklyn, whose hobbies include buying the wrong size shoes, loitering in vintage music stores and getting hit by taxi cabs. An accomplished guitarist, pianist and vocalist, he has revisited his love for solo performance, allowing him to explore subtle, and more intimate musical ideas than with The Break Mission, his band of nearly eight years. "Some of the most amazing shows I saw were by Ed Harcourt, Magnet and Elliott Smith, and these performances drastically influenced the way I wanted to present my music." He has performed with talents such as Duncan Sheik, Chris Trapper, Glenn Tilbrook, Mary Lou Lord, Robbie Krieger, The Kin, Royston Langdon and Chris Garneau. Visit Jeff’s profile at www.myspace.com/thebreakmission.com

by
Boston Metro,September 2007Reaches for the heights and poignancy of sensitive Brit Rock stadium balladeers like Coldplay or Embrace. But there’s more depth than such comparisons suggest on a record...
p
A
n
E
F
Song Title by Artist Name