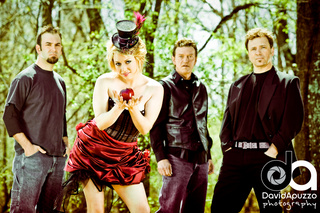 Coming together as a group of strangers from both coasts and from different musical backgrounds Jennifer Hill and Co have a distinct vibe that is all their own. Often described as a "piano soul collective" the sound is a musical martini of pop, rock,punk,jazz, soul, and funk shaken together with a fat ass piano pounding beat. Jen is a classically trained singer from the East Coast who loves all styles of music from Bjork to Puccini. Jennifer is currently title holder of "Best Female Vocalist" for the Hartford Advocate Grand Band Slam (the biggest Band Slam in Ct). In the article featuring the Grand Band Slam of 2009 One reader of the Hartford Advocate described her "like a twisted Fiona Apple with a little more spunk"...the Advocate's remark was "Now, Fiona's pretty twisted already,(this is the girl who said she's "break a boy just because she can,")..."So it's easy to see why Jennifer Hill and Co. stick in people's minds" (Hartford Advocate 2009) The band's influences range from The Beatles, Massive Attack, Bjork, Ben Folds, Pink Floyd, Fiona Apple, Blondie, Madonna,Sarah Vaughn, Esthero, Led Zeppelin to...everything you can possibly think of. These music geeks have been doing it all their lives and classical music is just as relevant to their music as is B.B King's Watermelon Album. To describe the sound would be like describing a painting full of different layers. Each one of them representing a different place in time, a different emotion and a different feel.On the song "Breath Easy" It's Blondie with Pink Floyd, Tori Amos, and Chrissie Hynde in the mix."Tough Year" is old school soul mixed with pop, and the song "Down Low" is a brooding tale of lust and love finally merging with the climax of the song squealing out in porn star perfection. "Pull off your Wings" is White Stripes mixed with a bit of jazz and a bit of Fiona Apple. Although the music is all original, Jennifer Hill and Co. are known to bring down the house with obscure covers from Pearl Jam's "Release" to Depeche Mode's "Personal Jesus". In the past two years they have accomplished a lot in the CT and New York City music scenes and have even scored a contract with CT's indie giant Sling Slang Records http://www.slingslang.com They have played in venues all over Ct and as a band have played well over 200 shows together. They opened for major label acts Jon Mclaughlin, Hanson and Miggs at The Webster Theater in Hartford, played gigs at The Warehouse, Sully's, Sweet Janes, Hungry Tiger, Zen Bar, Cafe 9, Cousin Larry's,Funky Monkey, Victoria Station,Sneakers, De Ja Vu,The Public and a bunch of other places big and small in Ct. In NYC they have played:The Alphabet Lounge, Arlene's Grocery, Fat Baby, Os Art House, The Rock Wood Music Hall, The Mean Fiddler, Desmonds, The UnderScore,Blaggard's, and recently a gig at Super Chic MakeUp store Sephora on 5th Ave in New York City for an Estee Lauder event. Besides club gigs Jennifer HIll and Co.has played in various festivals all over New England including NYC's Prestigious M.E.A.N.Y Festival, NYC's Shure Microphone "OS Art House" street Chic competition for indie bands, Ct River Music Fest, Save Kate 2008, and Swan Day Ct 2008 and 2009. Jennifer started the event"SWAN DAY CT" (SUPPORT WOMEN ARTISTS NOW!!) in 2008 and has had much success in it's efforts to bring female artists to the forefront. Check out http://www.myspace.com/swandayct for more info. Jennifer has also had success with her songs being used for movies and for festival compilations. The song "Tough Year" was featured on mp3 cards given out at 2008's CMJ event,"The Other Side" and "Little Girl" are featured in the indie Film "Walkways", A piano composition she wrote is featured in the film "Voices", and she has been known to sing a commercial jingle or two.Jennifer was also a top ten finalist in 2008's New England Mega Star Vocal Competition, resulting in a performance of her original song at "The Big E." The singles Tough Year, Little Girl, Up All Night and The Other Side were released on iTunes, Napster, Rhapsody, Amazon Mp3, iTunes Japan, and iTunes Australia in 2006 and the band has received airplay on Middletown's WESU Homegrown, Independisc Internet Radio, radio 104.1, Kiss 95.7 (Jennifer was the rockstar of the summer), and various other internet/ local radio stations all over the globe. Instrumentation Jennifer Hill:Vocals and Keys, Bob Schwecherl:Drums Jason Brown: Bass Tony Horn :Guitar Kevin Roots:Guitar Discography Tough Year, Little Girl, The other Side, Up All Night (on itunes, napster, rhapsody) ...others have been on radio and played on various internet stations, but these are the first released. NEW ALBUM AVAILABLE ON ITUNES!!!"FIFTEEN MINUTE LONG SENTENCE" CLICK HERE TO GO TO ITUNES http://itunes.apple.com/us/album/fifteen-minute-long-sentence/id359321319 Jennifer Hill has also had the amazing pleasure of recording at Bushwick Studios in Brooklyn. The 3 tracks (Little Girl, Tough Year, and The Other Side) were produced by Daniel Mintseries and have some fantastic musicians playing on them. Although they are not my "band" I want to thank them all for helping my songs come to life! Daniel Mintseris: Piano, Wurli, Digital Effects, Clavi, All the quirky tinkling things, and Production. Whynot Jansveld: Bass, Fretless. Doug Yowell: Drums. Dave Eggar: Cello. Josh Kessler: Guitar/production/mixing. ..and little ol me... Jennifer Hill... Singing...banging on the Piano,the Wurli, and letting out my soul.

We need 3 monitors, PA, would be nice if Bass Amp was available, 2 mic stands,at least 5 outlets or extension chord for pedals