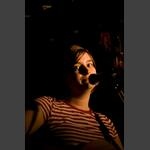 Jenny McIntyre's voice is delicate to the point of gauziness at times, like you could tear right through it if you accidentally placed your finger on a sound wave. It's the voice of a woman-child calling out from under the bed for all the reasons children find themselves there: fear and uncertainty, daydreams and pranks, love and mystery. Her songs seem drawn from a lifetime of diaries. They're don't tell the truth so much as they tell the tales of a full and eager heart in a world of disappointments. The songs are exercises in trying again, in pulling her chin up and readying herself for the next round of whatever doesn't go right.

At her core, Jenny McIntyre is a singer-songwriter, but she steps outside of that context whenever she can. From the outset of her debut album, the shape shift is on: the acoustic guitar finds itself in a digital universe where Amy Lee meets pop tunes meets indie rocker snarkiness meets admissions of failure, asking for help and confession. On top of and through it all—that bird-song voice sings from whatever strange or spurious branches it finds itself standing on, clear, persistent, unblinking.

At her live shows, she watches you like a wild animal—shifty but fascinated, ready to dart away at the first, too-quick movement. But there's something in her method, the fragile voice and open-selved lyrics, the occasional bumbled timing with the grinning shrug that shows just how much she wants to be tamed, placed in a warm palm and held, reassured that fear isn't the dominant reality, it's just a weather pattern that can and will pass if the song and the singer just try hard enough to cuddle up against a listener's heart.

Jenny McIntyre - Outside the Radio by The Greenville Scene
I first experienced the terrific songcrafting ability that Jenny McIntyre possesses in my own wannabe studio about five years ago when I worked with her on a demo. We worked at a fairly fast pace...
p
A
n
E
F
Song Title by Artist Name