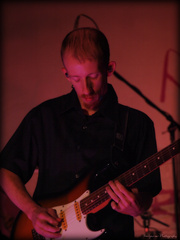 A 27 year old musician from Alabama, Jeremy Kennemur was born to play, and has been for quite some time now. A guitarist of more than 20 years, Jeremy also plays drums and bass and does programming. As a solo/recording artist, Jeremy is working on completing his first album, to be called "Through My Eyes", which is to be a guitar-based instrumental CD consisting of many different styles and influences. Strong vocal-like melody is always the focus of the compositions, with solos taking a more subtle position in the songs.

As of October 2008, Jeremy is the current guitarist for Jeff Bodley, a Contemporary Christian singer/songwriter.