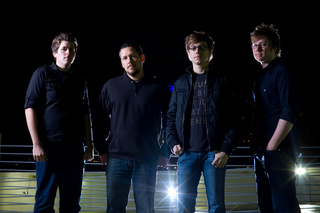 Ranging from tender to anthemic, Jets Under Fire’s sensibility and melodic, piano-driven style will definitely garner them comparisons to brit sensations like Keane, Travis, and the Verve. However, the band’s music is also shaped by Smashing Pumpkins, The Beatles, and the Beach Boys.
That being said, just one listen to their third release, Kingdoms, makes it obvious the band is informed by their influences, not confined. Built around Jason Poe’s emotive vocals, Jets Under Fire’s songs are unflinchingly introspective and penetratingly beautiful. What’s more is that Poe has that rare ability to suck the audience into his world, making it all but impossible not to hang silently on every note at one of their dramatic live performances. Poe’s delivery of lyrics like “Baby, I feel just like a fool,” and “All I need is a piece of solid ground,” is so honest and devoid of posturing that before you know it you’ve dug up these feelings and you’re experiencing them as you listen. This phenomenon is obvious to anybody who has ever seen the band live. It’s not uncommon to hear total silence when the band drops away during a bridge leaving only Poe’s words sung in his unmistakable, heartbreaking way. And in a city where people see live music to catch up with wayward friends, make new ones, and generally socialize, that speaks volumes about the band’s connection with its fans. Great songwriting, showmanship, and good old-fashioned hard work have done much to create the loyal fan base they now boast, but it’s Jason Poe’s ability to really make you experience the world through him that makes Jets Under Fire so hard to dismiss as just another brit pop band.

Jets Under Fire began as the solo project of Jason Poe, front man for The Professional Americans. The project started as a fit of creative fury after a job loss in 2002 and progressed slowly over the next three years. First came the Dave Bazan-inspired Promises, which was written as a linear concept album in 2002 and recorded in a small storm shelter in Southwest Missouri two years later. Poe’s bitter sweet melodies and emotive lyrics exploring the ideas of self-righteousness and forgiveness helped create a small but loyal fan base after the record was released the same year.

Jets Under Fire’s second release, The Winter EP, came in December 2004 and showcased a much more complete adaptation of Poe’s vision. Unlike the quiet, acoustic reverie of Promises, the new work was piano-driven and included a full band. Though some of the songs still boasted the quiet side of Jets Under Fire fans had come to love, the more bombastic tunes like All the Sad Songs and the fact that Poe played all the instruments, produced, and recorded the EP himself, garnered him a new level respect from his peers. In July 2005, Jason's full-time band, The Professional Americans, relocated to Austin, TX to try their luck in the legendary music scene. Despite promising label interest, The Professional Americans began to suffer from a lack of solidarity and within a year the members had gone their separate ways. Poe no longer had any reason to ignore the momentum Jets Under Fire had gained over the last three years and he set out to put together a set of players that could bring his music to life. Featuring drummer Corbin Petersen (formally of The Professional Americans) and bass player Todd Meador (formally of Cord), Jets Under Fire is now a recognizable name in the Austin music scene and is poised to go much, much further.

Austin Monthly - Kingdoms Review by Austin Monthly - June 2008
Jets Under Fire has assembled 11 tracks of well-played, flawlessly produced, piano-driven Brit pop.
Vintage Vinyl by Vintage Vinyl - St. Louis Mo.
While calling Austin home, don't expect any Stevie Ray style blues or Texas twang, Jets Under Fire have more in common with the sounds of Brits like Keane, Travis, and The Verve. We urge you not to...
Unsigned Magazine by Unsigned Magazine
'Kingdoms' has plenty of rock sensibility and some darned good guitar riffs. No lie. Jason Poe's delivery is subdued power. His voice sits on your pulse points and their traitorous thumps have no...
Austin American Statesman by Michael Barnes - Out & About
What is it about Austin and epic rock music? Explosions in the Sky burst (sorry) onto the scene a few years ago with a distinctive combination of tenderness and majesty. Add to the list of...
Purevolume.com by Ryan Sims - Purevolume.com
Jason Poe (from the amazing and completely underrated band - The Professional Americans) shows us a slightly more candid, personal look into his song writing abilities. Simple music, melodies that...