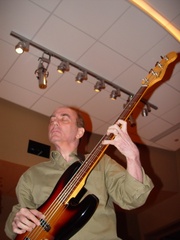 Evans, best known for his work with jazz saxophonist David Sanborn, has assembled the group DREAM to perform some of his instrumental compositions.

Jackie Anderson - Host of Midday Jazz on WJAB-FM Radio says: "You can feel the magic from start to finish with "DREAM". Smooth jazz at its finest. Don't miss this one."