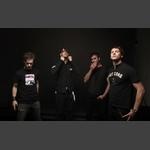 Life threatening hospitalisations, band members and managers lost to medical conditions and breakdowns, hellish record label machinations, prostitutes, cage fighting, strange corporate lifelines, lost weekends in foreign countries and all underscored by friendship and an unshakeable ambition and belief in the music. The story of Johnny Panic so far is enough for a 110 page screenplay let alone an 800 word press biography.

We haven't got time to get into all the gory details now, so let's just get the salient details out of the way first. While still at school Rob Solly (vocals, guitar, songwriting) met Jonny Shock (drums, drinking, comedy) on a bus in south east London bonding over a shared love of music and they've been playing together ever since. A few guitarists later they struck gold with Matt James who they found right on their own doorstep and after the amicable departure of long time bassist and friend Nash Francis, they drafted in Sean Mannion (Rob: "the most natural musician out of all of us").

Drawing inspiration from the glorious history of artists that have meant something in the last 50 years of rock and roll, any triangulation of where they're coming from would have to include The Clash, Guns n Roses and the early American punk scene (they've covered The Nerves/Blondie and The Ramones to spectacular effect).

In 2005 Johnny Panic released their debut 'The Violent Dazzling', an album of stadium sized hooks and melodies wrapped around concerns of mental health, prostitution, drugs and prisoners of conscience. A typical quote from Rob at the time went thus, "There's an ethic missing from a lot of bands" he explains. "We live in a society that refuses to question. That's where rock 'n' roll comes in. We're not here to shove them down people's throats, but every single one of our songs is trying to get something across."

Its the sort of record that makes much more sense in a post-'American Idiot' and 'Welcome To The Black Parade' world. Of those that heard it, many fell for the passion and scope of the likes of 'Burn Your Youth' (subject: young male suicide) and 'Automatic Healer' (prostitution), however the record labels inability to get their head around what the band had delivered coupled with some dark financial shit meant that the album never really stood a chance.

They managed to extricate themselves from their record label but it was a blow that would have KO'd lesser bands. Many will be surprised to hear Johnny Panic are about to come out fighting again

But then front man Rob Solly, knows a thing or too about fighting. From the age of 14 he's been practising Tae Kwon-Do, reaching a level that found him competing in the US and Australia, he's also done Thai Boxing in Thailand and trained in Brazilian Ju Jitsu and boxing as well. The last two years have found Rob training and fighting in mixed martial arts - yes, that's Ultimate Fighting Championship and Cage Rage stuff to uninitiated. In fact Rob's first paid fight is on September 30.

It's fair to say that he's in pretty good shape which probably helped when he was hospitalised with septicemia, a complication brought on from peritonitis (which, lest we forget, was enough to finish Houdini off). Having been rushed to hospital four times to be cut open and have parts of his damaged intestines removed, the thick scar running down his abdomen is the only tell tale signs that things have not always been so rosey. "I lost three and a half stone in three weeks because they were feeding me through a tube in my neck". Struck down while on tour in Aberdeen, the rest of the band would come visit to keep his spirits up. "Septicemia is incredibly painful, you're basically poisoning your own body, but that's nothing compared to having Jonny sitting on your wound bag and sending all the fluid straight back onto the wound. It would have been a lot worse if I hadn't been in charge of my own morphine drip.".

Its being able to maintain a sense of humour about things and this fighting spirit that found the band not giving up. Scoring a British Arts Council grant to travel and play at this years South By South West festival, winning ten grand from the Windows Live Spaces competition and covering The Turtles 'Happy Together' for NPower's 2006 cricket sponsorship. All of this helped keep the band afloat and enabled them to self finance the recording of their second album, inevitably and appropriately called 'The Good Fight'. Rob even collared Biffy Clyro and Therapy? producer Chris Sheldon in the street and talked him into producing and mixing the record.

Head and shoulders above their debut 'The Good Fight' is the sound of a band hitting the ground running. One hell of a comeback, key to it's success is the emergence of Matt James as one of the most distinctive guitarists in the UK. Hype? Check out the solos on 'Stay' and 'M-19' for the evidence, or just listen to the whole album. First single 'Dislocation' is an anthem to frustration with a refrain of "Boredom turns me on", while rumbling bass, squealing guitars and shouted backing vocals explode the tightly wound tension at the heart of the song. Musically the album is broader that its predecessor and along with the aforementioned influences The Stooges ('Gone'), Green Day ('Never Me') and Morrissey ('Heroes Of Villains') get at least a nod.

Rob's lyrics are once again a mixture of the personal and the political, but whether it's a Colombian guerilla movement or a dig at those that turn thugs into folk heroes it's never forced down your throat. "I like to think of it as amazing songs, with depth if you want it" says the front man. After everything the band has been through to get to this point they've got an album that sounds amazing, their goal now is to get the music out there to as many people as possible, to keep writing and playing the music that matters to them, basically to keep fighting The Good Fight.