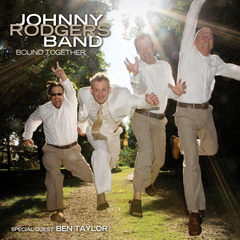 SUMMARY Call the music AMERICANA POP - rooted in the musical styles made popular in America and reflecting todays' vibrancy of sound. Johnny Rodgers' original songs have the poetry and motion of Paul Simon, the drive of Billy Joel, the melodic phrasing of James Taylor, and the flair of Elton John. The music literally takes you on a guided tour of American pop exhibiting the driving energy of rock and roll, blended with jazz sophistication. The band's chemistry and Johnny's personable stage presence completes the formula that creates the band's dynamic performances. MORE ABOUT JOHNNY RODGERS BAND

Fresh and unique, the Johnny Rodgers Band is brilliant jumping from one style to another with the ease of an expert trapezist: pop, rock, jazz. Their music literally takes you on a guided tour of American pop exhibiting the driving energy of rock and roll, blended with jazz sophistication. The band's chemistry and Johnny's personable stage presence completes the formula that creates the band's dynamic performances.

Johnny Rodgers Band was formed in New York City in 2003, when award-winning singer-songwriter-pianist Johnny Rodgers created "The Band" he had always dreamed of to add musical depth to his road-tested original songs. Johnny pulled together accomplished musicians with vast experience who were familiar with performing in all styles from pop to jazz and classical. The music comes alive with Brian Glassman on bass, Danny Mallon on drums, Joe Ravo on guitar and Johnny on vocals at the piano or on guitar.

Two years after the bands formation, the Johnny Rodgers Band's debut album, Box of Photographs was released featuring Johnny's original songs. His songs take you on side trips to places like upbeat New Orleans and Memphis soul. The album includes Grammy-winner Randy Brecker and his legendary sound on several jazz style cuts on the twelve-track album.

Johnny Rodgers Band is always attracting new audiences at the many clubs, festivals, and private events where they perform across the country. They have performed at Carnegie Hall, Lincoln Center, The Bottom Line, Birdland, The Metropolitian Room and The Jazz Standard in New York City, Ryles in Cambridge MA, Arturo Sandoval Jazz Club and Van Dykes on Miami Beach, as well at many festivals like Festival Miami at the University of Miami.

A dressing room and bottled water is much appreciated. Thanks

El Nuevo Herald, Miami by Daniel Fernandez
Johnny Rodgers Band are the true epitome of what is usually called “jazz fusion'' that is the result of the mixture of many things. A composer and spectacular pianist, this singer is a true dynamo...
All Music.com, Music Connection, JAZZIZ by Jonathan Widran
Johnny Rodgers with his clean-cut all-American looks, star-making moniker, James Taylor-lush voice, and résumé that includes shared stages with Paul McCartney, Liza Minnelli, Michael Feinstein, and...
JOHNNY RODGERS' WHAT A WONDERFUL WORLD by William Wolf • Wolf Entertainment Guide
The Oak Room at the Algonquin Hotel, known as a landmark of cabaret sophistication, isn’t the kind of place where one is likely to say the joint is jumpin’. But it was sure ju.mpin’ on the opening...
One Terrific Show to See by By Rex Reed New York Observer May 18, 2010
Johnny Rodgers After paying his dues in small clubs and big tours with Liza Minnelli, Johnny Rodgers (spelled with a "d" like Richard Rodgers, not with a "g" like Ginger Rogers and Roy Rogers) has...
Dose of Nostalgia for What Never Was by New York Times - May 12, 2010 Stephen Holden
“Any Place I Hang My Hat Is Home” isn’t just the title of the easygoing standard by Harold Arlen and Johnny Mercer that describes the vagabond life of a happy-go-lucky drifter. It could be the...