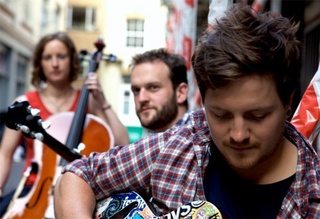 ''Glass half full folk'' is what Jonah Maddox likes to think of his music. The 27 year old is animated about his passion for sincere and heartfelt music. Jonah started singing almost as soon as he had grasped the fundamentals of speech; Fleetwood Macs 'Little Lies' was his first performance to a reluctant family, mid-dinner. From then on he began writing lyrics. Ten years later and ten years ago Jonah played his first gig, singing for a punk band, Fellthru, in Cambridge. The subsequent years saw him releasing EPs, and playing with his heroes throughout the country. The day Jonah met, and watched Andy Mckee play an intimate gig in Brighton was the day Jonah became a lot more serious about developing his guitar style and also the day he wrote the first song for his future debut album, Together We Are Taller.

Jonah Maddox - Interview by Together we are Taller
It’s not often that redundancy sparks a rise to musical fame, but in the case of newly established acoustic folk star, Jonah Maddox it was the catalyst he needed to not only push his dream but to...
MP3 of the day by Jonah Maddox
I’m not going to lie to you: I’m a sucker for “heart on-yer-sleeve” stuff. A bit of yearning, a bit of love, a bit of loss. Everyone can relate to it at sometime or another. So when I got a press...
FFS New Bands Panel by Jonah Maddox
Ian Parker: First, allow me to urge you not to read Jonah Maddox’s biography on his website. At least not until you’ve listened to his songs a few times. “I used to wake up in the middle of the...
Jonah Maddox by Together We Are Taller
There are real tracks of beauty to be found in Together We Are Taller. The only true bit of folk comes in the form of ‘Happy Places’ where Maddox demonstrates his ability to enchant with voice and...
p
A
n
E
F
Song Title by Artist Name