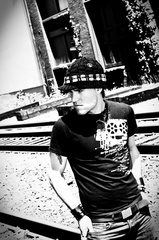 Jon Davidson is an alternative rock artist from Portland, OR. Davidson has toured in 5 countries and over 30 states. His music has been played worldwide on over 200 FM radio stations, and has appeared in several MTV shows. Jon has appeared in Entertainment Weekly and on E! Television. He has shared the stage with such artists as Puddle of Mudd, Powerman 5000, Hurt, Nonpoint, A Change Of Pace, Fall From Grace, and The Exies. Jon’s first first full-length solo album, Perfect Cliché, was released in October 2008. Jon wrote all of the songs on the album, and played all of the instruments and performed all of the vocals, as well. The album is a diverse mix of melodic rock and softer acoustic tracks, and has been described as a “poignant, mainstream-capable acoustic rock project.” Jon has toured relentlessly in support of the album. Jon writes articulate lyrics that deal with issues of love lost and found, war, human rights, and purpose. Davidson is committed to using his music to make a tangible difference. He frequently performs benefit shows and other events for such groups as the American Heart Association, the American Cancer Society, and the March of Dimes. No wonder Atlantis Music Festival says that Jon Davidson “has what it takes.”

Jon's talent.. by
Jon's talent is matched only by his professionalism. I highly recommend Jon Davidson and his music. --Stephanie Wagner, R3 Music Festival
Bright, chiming alt/rock.. by
Bright, chiming alt/rock that sounds good on a cold Oregon day. --Michael Mannheimer, Willamette Week
Jon has what it takes.. by
Jon knows his vocal range well and uses it to push his lyrics along without sounding strained or forced. Jon Davidson has what it takes. We're excited to hear what he does next. --Atlantis Music...
Irresistible modern rock.. by
Interesting uses of chromatics and major-to-minor key shifts. An irresistible modern rock palette! --Michael Wallace, Producer/Engineer: Live, Weezer
p
A
n
E
F
Song Title by Artist Name