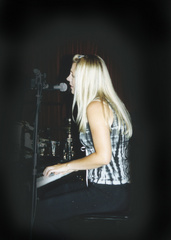 Jorie grew up in a big family (3 brothers and 3 sisters) in Brockton, a small town in Massachusetts. She began learning to play and write when her family won a piano in a raffle when Jorie was only ten years old. After high school she studied the craft of songwriting at the Berkley School of Music and Boston Songwriters Workshop to further hone her already impressive songwriting skills. Her first break came when she gave a demo tape to her dentist who was so impressed he offered to finance a set of recording sessions.

With those demo recordings in hand, Jorie moved to Los Angeles where her extraordinary talent, combined with her striking appearance and powerful stage presence, quickly garnered her the industry attention needed to set the wheels of her career in motion.
Jorie was frequently featured on the top 40 pop/rock charts on MP3.com. With over 20,000 downloads and added to 300 radio stations, several of her songs remained in the top 10. Her music connects with fans because it comes from the heart and soul of an artist. When you listen to Jories music you dont get hype, just talent, charisma, and truly great singing and songwriting.

Two of her latest singles (in the country genre) Old Guitar and A Mans Mind entered two national indie charts at number 19 and have been in rotation on hundreds of radio stations across the country.

Theres a deep spirituality within her music that speaks to the values and concerns that underlie everyday life. Backed by an incredible group of musicians and recorded with top-notch productions, her CD is being embraced by both fans and industry insiders who are hungry for sincere music from a true artist.