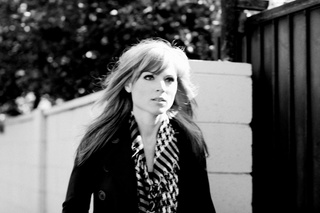 Indie rock artist and songwriter Jules Larson hails from Los Angeles, CA. LET'S STAY YOUNG was Jules’ first full-length album, released in 2012, with a single called "Running Wild" that climbed to #40 on the Singer/Songwriter charts the following year. Jules has been described by Yahoo! as “the alternative girl with soul.” Her songs have been featured in National ad campaigns, as well as TV shows such as THIS IS US, GREY'S ANATOMY, AMERICAN IDOL, AGT, SELLING SUNSET, and YOUNGER. Her soulful-sweet folk song “You Know It’s True" was on the soundtrack for the film THE LUCKY ONE, starring Zac Efron, which debuted as the #2 movie and soundtrack in the U.S. Jules has released 3  EPs: Strangers, A Lot Like You, and Parallels. She continues to release multiple new singles every year and has collaborated with hundreds of writers and producers throughout her career.

Stereo Subversion by Larson's full-length debut is a smart pop-rock gem
Jules Larson might not be a household name yet, but chances are good that you are familiar with her music even if you aren’t aware that you are. Two successful and critically-acclaimed EPs — 2009’s...
p
A
n
E
F
Song Title by Artist Name