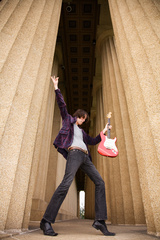 With his Nashville based Orchestra, Justin Kalk pens and performs a fresh brand of Rock & Roll, Hip Hop, Bluegrass and Jazz influenced Pop sounds. The songs are monster packed with catchy vocals, Olympic solos, swampy organ and a radical evolution of bass and beat madness.

Wiry front man, Justin Kalk, is a triple threat: An urgently soulful singer and a clever stripped down composer of modern commercial songs. But what’s the grittiest? Justin speaks such fluent Stratocaster he is kicking off a previously uncharted golden age of sexy electric guitar.

Despite The Kalk’s relatively polite literate songwriting, Justin always has deployed his inner Iggy Pop on stage through the teenage years of dive bars, parties and music festivals. Though the stumbling, jumping, bloody Strat behind the back antics is a brand not a base, when the show finally winds down, the screamy-sweaty crowd is left feeling suspended in mid-air. The tiny hairs on their arms and necks stand up. Brilliant raw funk soaked in driving, convulsing heat.

Supported by the equally impressive musical exchanges of piano/organ donor Brent Burgee, Steo Britton on the Bass and the drums of Michael Green at Nashville’s beautiful Dark Horse Recording Studio. These new recordings are unstoppable.