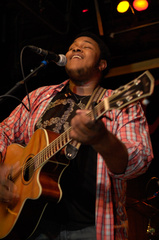 Native Nigerian Kalu James may not look the part of an accomplished folk rock singer songwriter, but with the release of his second CD, "Dim the Lights," and a Day(June 11th) named after him in the "Live Music Capital of the World" Austin,tx proves otherwise. Recorded in his new home in Austin, Texas, "Dim the Lights" showcases Kalu's affecting lyrics with his unique style of vocal delivery. The buzz from Kalu's sophomore recording resulted in a sell-out show at the recent CD release party at Ruta Maya International Headquarters as well as gigs at well-known Austin venues Antones, Stubb's, Momo's etc and a second upcoming appearance at Utica Music Festival in New York. Born in Nigeria and raised in Republic of Benin , Kalu fluently speaks three languages - French, English and Igbo (native language ). Although he had sung in the choir since age 9, it wasn't until he moved far from home to New York State in 2001 to study computer technology that he discovered his gift for songwriting. Kalu says, "Music is a journal for me. It's a way for me to express and chronicle my days. Some people have diaries. I have music.Instead of defining myself by putting my music in a box called a 'genre,' I consider it 'feel' music. I want to connect to people by letting them know how I feel. Maybe they feel that way, too, and it creates a link between us." Kalu James brings to the table emotive, genuine lyrics with his remarkably epic, unique and unforgettable style of vocal delivery. Touching on delicate subjects with eloquence and vivid imagery, Kalu James will capture you, challenge you and change you. Written words don't communicate the scope of Kalu's passion or approach. Recordings convey the spirit adequately, but the best way to experience Kalu is to see him live. The songs and moods take on lives and possess an individual energy of their own, transporting you to where he wants you to be and allowing you to feel what he wants you to feel. His messages are potent and important, and there has never been a time when an artist like Kalu James was more necessary than right now. With his debut album "The Way I Feel" already available on ITUNES, CDBABY and other internet stores, He currently released his sophomore album, "Dim The Lights" at Ruta Maya International Headquarters, Austin TX Kalu recently moved to Austin, tx where he can be found playing at the local coffeeshops, bars and music venues. His Musical journey spans from New York to Los Angeles.

Interview with Austin Daze by Austin Daze
With the Voice of An angel, this song bird is taking Austin by storm ...
With music that speaks to the sou by Juniors Cave Online Magazine
With musicthat speaks to the soul, Kalu James has nicely blended the sounds of acoustic, folk, and soul into a nice melodious tune.
hearing Aaron Neville with the lyrics of Bob Dylan by Austin 360
By Amy hunterHis name is Kalu James. He is from West Africa by way of Rochester, New York. i was just blown away. the songwriting and voice stunned me. it was like hearing Aaron Neville with the...
..."James' rich tenor carries the set. by Austin Chronicle
..."James' rich tenor carries the set. A bright personality and swaths of soul, rock, folk, and reggae will make him a favorite...
Austin Monthly by Austin Monthly
War Outside" is a beautiful ballad