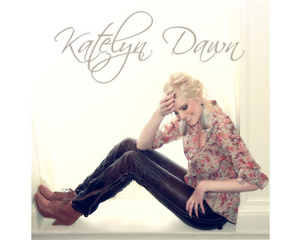 Although Katelyn Dawn hails from a small town, her ambitions guided her towards the big city. Armed with courage, talent and determination, she made the trek to Toronto as a 19-year-old woman from Manitoba with a guitar, a collection of original songs, and a temperamental Dodge Caravan lovingly nicknamed the "deathmobile". At 21 she is moving forward with her music career with a new EP after having spent a year exploring the road towards independence. Though there have been many roadblocks heartbreak and hardships, Katelyn has never taken her eye off of that final destination, which is to bring an honest heartfelt message to all you amazing fans through catchy melodies and thought provoking lyrics. Says Katelyn: "I really just want to be able to create music that I am proud of, and that other people can relate to. Being on stage and having an audience feel my songs along with me is the biggest high I could imagine, after all, music is the only thing that connects strangers on such an intimate level." With a new EP on the horizon, a Discovery Channel Showcase, and a top spot from Canadian Idol under her belt, Katelyn Dawn has never been in such an exciting position! Her career is about to take flight and the possibilities are endless!

Plug Music Inc by Bobby Gale, Tracking Agent
Katelyn is so energetic, so talented, so driven to succeed, that whatever her objective or goal is, she inevitably accomplishes yet another significant feat in her lifelong pursuit to perform &...
CBG Artist Development by Chris Burke-Gaffney, Manager/Producer
a totally solid songwriter / guitar player with a powerful prescence on stage" Chris Burke-Gaffney CBG Artist Development April 2010
'The Window' CD Review by Winnipeg Sun
The heavy hitters can't upstage the hummable melodies and jangly hooks of her sunny root-pop, most of which wouldn't be out of place next to sheryl Crow on your playlist." by Darryl Sterdan,...
iTunes Customer Review by iTunes
Her vocals are amazing, I have seen her live back in Winnipeg singing and playing acoustic, she is truly talented. Katelyn is one to watch how her career unfolds with her original music content....
Famous Portrait Artist Entranced With Katelyn Dawn by Winnipeg Sun - April 28, 2008
I was going to paint Grace Kelly once,... I regretted that it didn't happen until I met Katelyn, because she's like an incarnation of Grace. You can't fake that kind of aura. Her CDs are one thing,...
p
A
n
E
F
Song Title by Artist Name