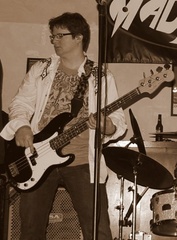 Keith Hanson is a singer, songwriter, musician, producer, and engineer who has been playing in bands since age 13.  He has played in countless venues from dives to festivals in his current San Francisco Bay Area, Tahoe, Los Angeles, Boston, and Denver.  He plays most of the instruments on his albums, many which he recorded in his garage. He has been a writer or co-writer on over seven albums and has many recorded singles not yet released.

Keith is half of the rock/pop duo, "The Genius of Jack", which he created with his singer/songwriter/musician friend Paul Carew.  Many singles from this project have been played on Internet Radio stations for years.  In November 2012, The Genius of Jack released an album of 16 of these singles, "Better Days", which is available for sale on iTunes.

Keith is typically fond of the British Invasion, the melodic American 60s, 70s punk, 80s pop, and recent Brit-pop.  A couple of his favorite current bands are Travis and the Soundtack of Our Lives.  And Green Day never fails to impress!

Not big time yet so we bring our own!