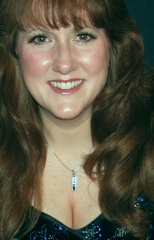 Kelly Domino has recently become a singer/songwriter full-time, fulfilling a childhood dream. She is living the title of her debut album, "Hold On To Your Dreams", available now. She is also a Wisconsin native, computer engineer and wife/mom.

Her music is best described as Adult Contemporary, with pop, country, and torchy blues or jazz as the song styles on her debut album. All have powerful lyrics, and the potential to be crossover hits in multi-genres. The music and lyrics evoke emotional highs and lows, in situations that all people can relate to. Some songs feature prominent saxophone, with a Norah Jones or Quarterflash style. The other tunes are reminiscent of the styles of Sheryl Crow, Annie Lennox, Ann Wilson, Carole King, Bonnie Raitt or the late Karen Carpenter.

Kelly has lived most of her life in the Midwest (Lake Geneva, Janesville, Chicago, Flint, Dayton, and Fort Wayne; the exception was 6 years in Albuquerque). She is happily married with four daughters, two of which are still at home.

She is currently working on her second album, and preparing for her first tour (summer 2009), which will feature songs from her first two albums. Because the first album was cut using studio musicians, she is also in the process of forming live performance and tour bands.

Her favorite analogy about what she is doing is this: "I'm in the game, I'm at bat, and I don't know if I'll have a hit, home run, or a strikeout. I also don't know exactly what position I'll be playing in upcoming innings. What is important, though, is that I'm in the game, it's only the first inning, and somehow, deep down, I know that I'm going to be a player to watch."

N/A. She is finalizing her songs for the second CD in preparation for studio recording in February, while also selecting musicians for/planning her first tour, which will be in the summer of 2009. The tour will feature songs from her first two albums.

Interview at Sweetwater Studios by
An interview with the Editor of 5 Fort Wayne area publications, Sue Reeves, and their Web Editor, Dominic Adams, occurred on Friday, November 21st (the release date) at Sweetwater Studios in Fort...
First CD Review in "Whatzup" Magazine by Whatsup Magazine, 11/27/08
One of the more heartening developments of the democratization of the music industry is the influx of honest singer/songwriters who don't necessarily fit the jet-setting, zero-responsibilities,...