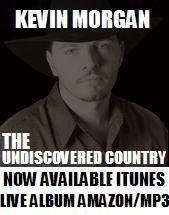 About Kevin Morgan (www.myspace.com/kevinmorgancountry)
Kevin Morgan is a Pennsylvania native and singer/songwriter and country music performer. He has performed throughout the United States, landing radio airplay and numerous TV spots. He has also been the opening act for such names as Lonestar, Merle Haggard, Travis Tritt, Montgomery Gentry, Tracy Byrd, Tracy Lawrence, Joe Diffe, David Allen Coe, Clay Walker, Lila McCann, Lorretta Lynn, and many more.
After opening for Lonestar, Kevin was invited backstage by lead singer, Richie Mcdonald, who invited him to come to Nashville where Richie was intrumental in getting Kevin a Sony songwriting deal, and record deal. As it often goes, unfortunately, one small man with power took Kevin’s record deal away from him and to everyone’s disappointment Kevin had to return to his home in Pennsylvania. Before Kevin left he had the pleasure of meeting Gretchen Wilson who ended up singing three demos written by Morgan. Kevin is recording his newest CD project entitled " The Undiscovered Country," and with your help perhaps he can get some recognition from "MySpace" which will help him regain lost ground. Kevin is still in contact with Richie McDonald and the two are still writing songs together.

Perhaps one of Morgan’s greatest writing efforts, is a song called "Fallen Heroes" which is a tribute to the 911 tragedy and our troops in Iraq and Afganistan. The song was ranked number one for two straight months in the Northeast and was performed for the Vice President, as well as for two anniversary/dedication ceremonies at the crash site of Flight 93 in Somerset, PA.

After years of charity work for such organizations as Cystic Fibrosis, American Cancer Society, Presents for Patients, Verland Foundation, Pittsburgh School for the Blind, various blood drives, and others, Kevin is turning his attention to the Wounded Warrior Project. By raising awareness with his tribute song "FALLEN HEROES" Kevin hopes to raise badly needed funds for our returning injured veterans from Iraq and Afganistan. With the sales of this song and your help Kevin hopes to contribute to making a difference in the quality of care for our returning veterans. Fallen Heroes is available for purchase above. Your support will be greatly appreciated. Dont forget to tell all your freinds about our efforts. Thanks for stoppin’ by!