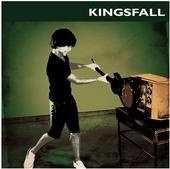 When Larry Leicht (bass), Devin Dean (guitars/vocals), Daniel Lopez (drums), and Joshua Dufrene (guitars/vocals) came together in 2006 to form Kingsfall, they all had one thing in common. They had all grown up in or around music for most of their lives. And it soon became clear that they all had a common vision of taking their unique sound to the masses. Based in Dallas, this exciting and energetic band with their own distinct sound has been compared to Mutemath, Coldplay, Third Eye Blind and Switchfoot, who they opened up for this past year at Baylor University. They put much emphasis on throwing a great live show and spread a message of hope with tenacity and aggressiveness. Their self titled debut CD is receiving airplay and rave reviews from industry leaders, critics, manufacturers and fans alike. Going into the studio this month to complete their follow up CD, 2010 looks to be a promising year for Kingsfall. Kingsfall is the kind of good that should have record labels fighting over them; the kind of good that took Switch-foot from being a popular band in San Diego to a household name all over the world." --Kim Jones, Music Editor / About.com