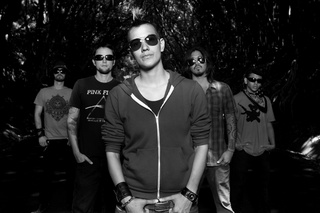 KINGS OF SPADE dish out a raw and grungey blend of urban funk, dirty blues, deep soul and rock. Don't let the tattooed arms or florescent mohawk of lead singer, Kasi Nunes, fool you. Kasi's whaling vocals are fiery, passionate, and a unique hybrid of soul queens Janis Joplin and Aretha Franklin.  Proud of not being boxed in a specific genre, the KINGS can remind you of a classic fist-pumping rock band in one number, take you for a dance-pop ride in the next, and then charge straight into an old smokey blues riff.  Their shameless dancing, foot-stomping, and highly energetic live show has landed them gigs at LA's House of Blues, The Avalon, and The Viper Room, as well opening for world-famous acts like Bon Jovi, Daughtry, Mutemath, Everclear, Kings X and the Deftones. Their song “Boys In The Band” is featured on the film soundtrack for the Warner Brother’s released “Utopian Society.”  In 2012 KOS kicked off a cross-country tour at the Autumn Lights Festival in Los Angeles capturing fans in Arizona, Austin, Boston, Vermont, and New York.  They played an extensive 22 show US Mainland Tour in March 2013 which included a performance on Good Morning Austin on Fox 7 news several showcases at the theRedGorilla Music Festival, the Dirty Dog, Blind Pig Rooftop Stage, and the Texas Rockfest Stage in Austin . They just finished recording their 2nd studio album in Nashville with producer Dave Cobb (Rival Sons, Shooter Jennings), with a release date set for February 14, 2014.  "San Antone" the second track off of the new album has already been licensed to an upcoming major motion picture.  Kings of Spade will launch a 20-city US Mainland tour in support of the new album in March 2014.

X-Factor returns to Harmony by Jason Genegabus, Honolulu Star Bulletin
When X-Factor left Hawaii for the mainland two years ago, most people thought that was it for Kasi "Rebel Girl" Nunes and her band.Normally, musicians decide to move in search of better...
Music Montage by Melissa Moniz, Midweek
It was through the power of Anna Bannana’s open-mic night that Kasi Nunes (vocals),Jesse Savio (guitar) and Matt Kato (drums) met up to form X-Factor, the urban/funk/soul/blues/rock/hip-hop band...
Bon Jovi Opening Act Contest Winners by KHON2 News (FOX Affiliate)
KTUH Spring Rock Concert by Metromix Honolulu
Thanks! Bon Jovi by Honolulu Star Bulletin
“Uncle Tom” Moffatt, center, congratulated Kings of Spade moments before they opened for Bon Jovi Feb. 11 at Blaisdell Arena.The group — Jesse Savio, left, DJ A2Z, Matty D, Kasi Nunes, Max Benoir...
Kings of Spade sets stage alight for Bon Jovi by Honolulu Advertiser
Local rock band Kings of Spade got its 15 minutes (actually, more like 30) of the big time last week when it opened for Bon Jovi.The band, which bills itself as funk, soul, blues and rock fusion,...
Kings of Spade Winnging Over Fans by
This Halloween, Hallowbaloo in Chinatown was definitely the place to be. Not only were there amazing dancing performances by groups like The Shakti Dance Movement and Cherry Blossom Cabaret, but it...
Kings of Spade Roxxors my Soxxors by
Ever been to see a band where the music is so good that the rhythm, as Urban Dictionary says, “starts from your toes (which are in your socks) and works its way up”?I’ve been looking for an excuse...
p
A
n
E
F
Song Title by Artist Name