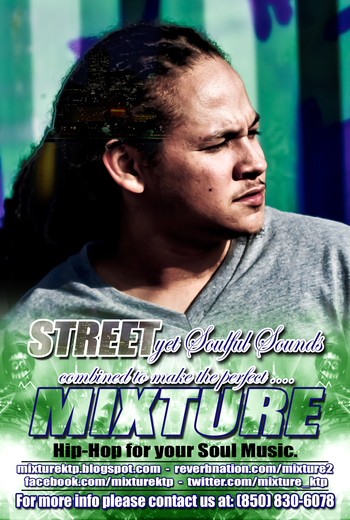 Mixture and Melee, the boys of Knight-Time Productions (KTP), have been rapping and grinding together since they met at a freestyle battle at Florida A&M University nearly three years ago. Mixture, the self-proclaimed "loose cannon" is definitely the more passionate of the two. As visionary and co-owner of KTP, he speaks about the dynamic between him and his partner, "because of the environment I grew up in I have a bad habit of losing my temper sometimes, and I get irritated with people real quick, but Melee is definitely the calmer one, so he keeps me in check. He’s a real people person, he’s better at seeing things through other’s eyes. We work as a team and balance each other out.” Melee, who has only been rapping half as long as his counterpart, has been with Knight-Time Productions since shortly after its beginning. He has quickly stepped up and become a huge asset to team KTP. When asked his opinion about the duo he said, "Since I haven’t been doing it as long as he has, I don’t necessarily have the same ‘passion’ he does. Don’t get me wrong, I’m definitely very passionate about what we do, I love what we do, but his [passion] comes from rapping since 12, and building this company from the ground up. He’s got that leader spirit that won’t let us slack off when we're physically tired; don’t feel like going out selling CDs, or writing four or five songs back to back."

Thanks to their street grind, Mixture and Melee are becoming two familiar names among fans of Tallahassee independent Hip Hop. These boys have performed in various venues from Orlando to Atlanta, been featured on numerous mixtapes, received multiple spins from local DJ’s, dropped ten label mixtapes, and currently working with artists in the U.K. Their newest mixtape entitled "007: The World is Not Enough" is hosted by Tampa's own DJ HeadBussa and is rapidly gaining popularity all throughout Florida. It features production from up-and-coming producers Vizion, Lex Luthor, Kennedy, and Siah, the newest member to KTP. Their profoundly original single "CALIFORNIA DREAMING," produced by Young Perc out of California, has caught the ear of many of those heavy in the underground scene and was placed on the latest TJ’s DJ’s TasteMakers disc. The song was also featured on The 5th Annual Texas Summer Music Conference disc. Keith Kennedy of TJ’s told Ozone Magazine, "It's not a dream. It’s a west-coast song from the sunshine state, primed to bang in every 6-4 across the nation-hot!”

Knight-Time Productions has added Siah, a young artist and producer from Racine, Wisconsin, to their crew. He was responsible for creating the beats for their club bangers "DON’T MOVE" and "DAMN," and has been a great burst of energy and a great addition to the team. Siah is also featured on new fan favorite "ICE CREAM LOVER,” official single. The upbeat, delectably creative track recently debuted on the Tallahassee airwaves and was a sweet treat to all who heard.

The new trios Mixture, Melee and Siah have a drive, determination and ambition that seek to bring the unique and clever sound of Hip Hop back into the industry. The distinctive flow and fashion sense of newcomer Siah, the extraordinary lyrical style of networking-genius Melee and the distinguishing originality of leader Mixture proves that these boys are well on their way to becoming the next voices of Hip Hop.