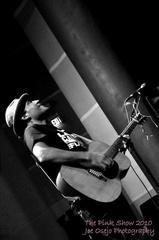 Lance Canales was born and raised in the southern foothills of California’s Central Valley where he literally lived the life so many folk and blues artists have written songs about since the birth of roots music, hard labor, one room shacks and taunting ghosts whispering of a better life, owning nothing but the music in your head. It would take years for Canales to connect his history to his own sound -branded “Native Americana” by fans- tuning down his smooth yet gravelly vocals, compared to the likes of music legends Tom Waits and Greg Brown, as he tuned up his acoustic guitar to slip and slide in delta swamp water while executing a clean picking style. After years of weathering hard rock bands as a lead vocalist, Canales began changing his musical course and in 2003 he teamed up with blues guitarist Ben Cline to form the acoustic duo Inyana. The debut CD, “The Path”, was released in 2004 from Canales’ independent label,” Black Oak Records”. In spring of 2007 Canales and Cline made the decision to pursue different musical paths and Inyana went dry. Canales immediately went into the studio to work on recording his first solo CD and in 2008, “These Hands” was released. On “These Hands” he was able to take his time and dig deep, really exploring his place in music. Songs like “Aboriginal alien” and “Ruin” conjuring up the spirits of his past. He took his solo “Native Americana” act beyond the borders of California’s Central Valley and played out to other areas of California, Arizona, Kansas and Massachusetts. Songs from “These Hands” began popping up on International radio programs such as “Earth Songs”, Satellite radio and many other Indie radio stations across the country. Northern Ireland also welcomed him in August of 2009 as he captivated the crowd on the main stage of the Belfast Blues Festival. At home, in Fresno, California, he was playing heavily with what was then simply called “The Lance Canales Trio”, featuring the rich bottom end of the upright bass and the quick earthy beats of the Cajon. A rich new sound developed, complimenting Canales’ already poetic and personal songwriting skills. “Lance Canales and The Flood”, his present group, features the new sound that was born out of “The Trio”, a bluesy, rootsy, folk rock with a Native Americana twist. “Lance Canales and the Flood” are currently working on a new album so that they can scatter their sound across the country on a tour in fall of 2010.

brilliant by T. W. Catchpole Mountain Press
Lance Canales's songs about his Grandmothers 1973 Cadillac, his cat mojo and his ancestors are brilliant"
His inner soul flows thru his flute. by Ms Sunshine Fresno Famous
Lance Canales is an amazing musician. His inner soul flows thru his flute. When he embraces his roots and caresses the guitar, you catch a glimpse of his life, thru his eyes
Soul of a Native poet by Aaron Collins Lifestyle Mag
Canales revealed the soul of a native poet perhaps inhabiting John Mellencamp's conflicting odes to simple Americana tinged with sorrow, and the powerful physicality of Bruce Springsteen's voice,...
Weekend Rewind by Mike Oz
It was my first time seeing Lance Canales and I dug his earthy rock/blues/country hybrid
p
A
n
E
F
Song Title by Artist Name