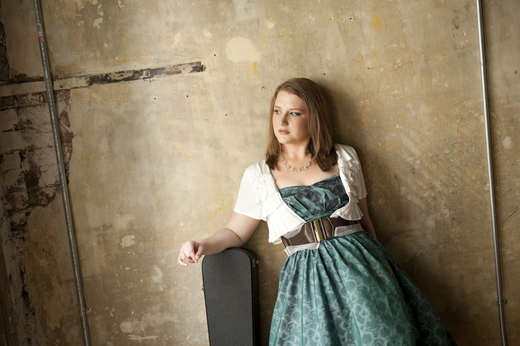 The solitude of the open road, loves lost and the harsh beauty of the Texas sun – these are just a few themes listeners will find in the songs of Lauren Fulbright.

Whether writing from the dimly lit interior of a British pub or driving the dusty back roads of the American Southwest, Lauren has long used music as a means to capture and understand the world around her.

A native of the Washington, D.C. area, Lauren began singing and performing at a young age. After participating in a talent show at the age of four, the aspiring singer spent her school years performing with various choirs.

After picking up the guitar as a teenager, Lauren drew upon influences like Jewel, Sarah McLachlan and Lori McKenna as she began to write her own songs. A move to England at the age of 19 deepened this process, with early songs like “A Million Miles” and “Sleepless” chronicling her feelings at that time.

After graduating from Randolph-Macon Woman’s College, Lauren moved to Austin, Texas, with the hope of pursuing her dream of becoming a professional singer/songwriter. The people and places she encountered there became a strong inspiration for her songwriting.

Lauren returned home from Texas to get her master's degree in international journalism at American University.

She has written for newspapers in both Virginia's beautiful Shenandoah Valley and Baltimore; and continues to write professionally while pursuing her songwriting career.