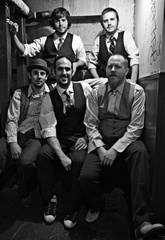 Like a roadhouse ghost rattling his chains, Leroy Justice’s debut album, Revolution’s Son, comes to life. Their revolution is the same one rock n’ roll has been fighting since the blues and country bedded down together – to water the tree of musical liberty with the blood of true patriots. Leroy Justice opens a vein that’s colored like the Black Crowes, Marah, Old 97’s and vintage Tom Petty and the Heartbreakers. It’s roots music that never strays too far from the garage or an open whiskey bottle.

Chief lyricist, hickory smoked vocalist and shred-tastic guitarist Jason Gallagher discusses the band’s lawman name, “It has a good mix of soul (ala Leroy) and Americana (ala Justice). It is the name of our friend Stoney's father. Literally. He owns an auto body shop and couple of poker machines, and plays a wicked telecaster. He lives in South Carolina. We wanted a good name. He has one of the best. We used it.”

From the opening one-two punch of “Revolution’s Son” and “Bender” on through slow burners like “Belt Buckle” and “Hey Baby It’s Me”, their debut mixes youthful energy with a surprising confidence that recalls Lynyrd Skynyrd, MOFRO and Little Feat – all groups that seemed to arrive fully formed, ready to use dead solid songs & heartfelt playing to whip you up something that sticks to your ribs. The young Bruce Springsteen in his arc towards Born To Run also springs to mind. Leroy Justice vibrates with the same kind of promise these powerful ancestors had.

“It's soulful rock. Like American rock. Like rip your heart out and drink it down rock. It's the rock we grew up on,” says Gallagher. There’s a distinctly Muscle Shoals vibe, especially when Anise White belts it like a ‘60s Atlantic Records soul sister behind Gallagher. When you find out they’re from New York City it throws you for a bit of a loop. “When I think of Southern rock, I think of confederate flags and long hair and harmonizing guitar leads. We aren't really into all that,” offers Gallagher. “We are into playing in the pocket and we can't much listen to indie/pop/metal rock. THAT's kind of southern.”

”When I came to NYC, I was writing ballad/folk songs. When the band started, everything got louder. In a good way,” Gallagher recalls. “There's just something about the city that makes you want to make people shake their asses, sweat a little bit, and raise their drinks and yell ‘YEAH’. Our sound adjusted, and there was no looking back.”

Bassist Bradley Wegner further excavates their sound, “My influences draw more from the R & B end of things. I learned how to play music through Parliament/Funkadelic, Curtis Mayfield, Bill Withers, Beastie Boys, Taj Mahal and Motown. The day I bought my first bass I got home and pieced together Rage Against the Machine’s "Take the Power Back". Walking side by side with all of this were always great songwriters like Townes Van Zandt and Blind Melon. Neil Young's Harvest and Harvest Moon were the Cocoa Puffs of my childhood.”

The band performs regularly in New York and is branching out into the Northeast. An upcoming appearance at Austin’s 2006 South By Southwest Festival will introduce them to an even wider audience. In the meantime, they’ll be bending an elbow and breaking hearts. It’s what rock & roll outlaws do.

“Leroy Justice has participated in plenty of bad behavior in our time,” says Gallagher. “We just think bad behavior creates some of the best, as well as some of the most regrettable times in our lives. Both are worthy of a good rock song.”

The Aquarian by Dan Alleva
...the new material represents an evolving Leroy Justice looking to shoot a spark into the bar-room boogie that was the calling card of Revolution’s Son.
Jambase by Dennis Cook
NYC's Leroy Justice has the same spark as early Black Crowes and Mother Hips. There's enough twang to make you think it's southern rock but the tender lyrical turns tie them closer to Springsteen...
MTV News by Kurt Loder
The blues-fueled spirit of Seventies Southern rock lives. Oddly, it lives in New York City. The crunging riffs, the twinned leads, the squealing keys, the hard-road vocals--the backup chicks! All...