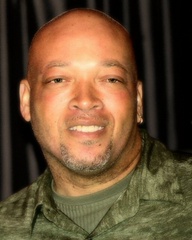 Leroy Stringer Jr., A.K.A. “Miami’s Peoples Poet”, is a Miami Born Native whose poetry seems to reach not just some, but all of the people who are privy to hear his work. His sharp and witty writing style has been widely recognized and subsequently many of his works have been incorporated in the writing courses of Florida Memorial University.

During the year of 1997, he began writing seriously after seeing the effect that Poetry had on a troubled youth in a Juvenile Justice program for which he was working at the time. He has been writing and performing ever since. But that, for him, was not enough.   Along with the accompaniment of original musical sound tracks and creative skits, Leroy captivates his listeners, with what he deems “NEO POETRY”. While juggling the responsibilities of being a dedicated husband and father, Leroy performs & captivates his poetic audience in venues throughout South Florida, the U.S. and abroad.

In 2005 Leroy teamed up with other artists such as Malcom-Jamal Warner, Ainsley Burrows, 13 of Nazareth, Charneice Fox, & others to create a compilation CD entitled “Fusion-A blend of Poetry and Music” which was released on Malaco Records (www.malaco.com) and features his hit single “Watching My Life Go Down”.

His latest project entitled “Poetically in Love” was released in December of 2011. Together with Miami’s Platinum producer, Tony Galvin (AVX Music Group), Juan “Gold” Areco (Fort Knocks Entertainment), and Frank Andrus (Str8t Up Records), Leroy has put together an “Extraordinary” Love story. This CD steps outside the norm and brings the listener into a roller coaster ride of ups and downs and crazy turn arounds associated with love. It gives insight through heartfelt lyrics while delighting the listener with smooth groves. Definitely not the ordinary!

Leroy Stringer’s works are available on all digital media and can be accessed through his website www.lyricalride.com or through www.cdbaby.com .