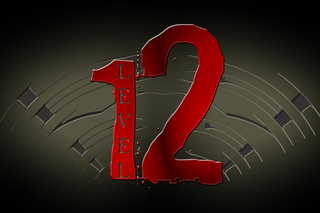 What if you took rock, soul, metal, tribal, funk, and jazz and put them in a big pot? Then what if you wrapped your head in tin foil and stuck your head in the microwave?* What you get is Level 12 – powerful, emotional, sensual, devastating… music.

With such influences as KoRn, SoulFly, Sevendust, Pink Floyd, Black Sabbath, Mr. Bungle, Frank Zappa, HED Planet Earth, Stevie Wonder, Patty La Belle, Tangerine Dream, Infected Mushroom, and Sublime – there’s a lot that goes into this music. Each influence finds its way in to the right song at the right time to create a carefully orchestrated punch in the face. And this is what Level 12 wants to do… punch you in the face. An audio experience you won’t soon forget… nor can you hide it from your girlfriend.

It all started in March 06 when longtime local musician Bo Nelson (Drums) called Chris Green (Guitar) for a jam session. The two musicians hit it off and quickly brought in Duthc Hart (Bass), Kyle Chase (DJ), Ron Souza (Guitars / Back Up Vocals) whom were members of previous projects and veterans of the local scene. The five wrote several songs during the first jam and knew that they had something special. All that was needed to complete the group were vocals. Two years were spent working with various singers and trying to find a perfect fit for each members’ talents. At long last, in September 07, Bo reconnected with a singer from a prior project, Freddie La Vel. Freddie laid down those first vocal tracks and Level 12 was born.

Level 12 burst on the scene with their first independent four song release in late February 08. Following that, Level 12 played their first sold out show at the Burro in Livermore, CA in March. Only climbing upwards, Level 12 has also started receiving radio play on internet and college radio stations such as UC Berkeley’s KALX.

This band just got here and your mom’s not tired yet. Better get to know them, they’re part of your family now…** ;)

Level 12 to be on T.V. by
Yea you heard us right, we're coming from space to take up 50 seconds on your television. Freddie and Bo have done a brief interview that will air along a segment about Eddie Money and the Burro...
p
A
n
E
F
Song Title by Artist Name